I’m working on a Knocked Up response piece as I speak, but it needs to be acknowledged that Seth Rogen is a star. He’s witty and affable with a cool-sounding gravelly voice, he’s a brilliant writer, and he projects an agreeable bullshit-free, smart-stoner persona that goes over gangbusters with men and fairly well with women because they find him puppy-dog cute. He’s pretty much the new John Belushi — just as wily and overfed, but a little more easy-going and a little less manic and over-the-top. But definitely a guy’s guy and funny as hell. 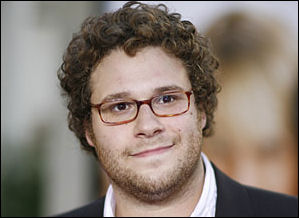 I’m especially keen to see Rogen in The Pineapple Express, a David Gordon Green movie that’s now shooting, from a script by Rogen and Evan Goldberg. It’s about a couple of stoners who get mixed up with a malevolent drug gang, and with Green calling the shots you have to figure it’ll be a bit more dramatic than funny, or certainly a mixture of the two.

But my God, Rogen needs to tighten up and lay off the cheeseburgers and the cheese fajitas. He’s only 25 and he looks 35, easily. (Apatow shares this exact observation via some girl dialogue in Knocked Up.) Rogen doesn’t have to turn himself into Orlando Bloom, but if you’re this roly-poly at age 25 you’re heading for trouble. The way Rogen’s going he’ll be a super-moose by the time he’s 30 and will almost certainly be coping with health issues ten years later. Does he want to be Chris Farley or John Candy?

I’ll always have a black spot in my heart for the first half of The 40 Year-Old Virgin, but no more bashing Apatow — he’s done pretty well with this film and deserves respect. Knocked Up stil has that basic believability problem that I mentioned a few weeks ago, and it ignores money issues like the plague, but Apatow has made a 132-minute comedy that just breezes right along and feels like 100 minutes or less. It’s an entirely decent, good-hearted, sometimes very funny movie.