So you pronounce Shia LeBeouf‘s last name how? Lebwehff, Leboaf, Lebuff or Leboof? (His first name is pronounced like “hiya”) And does the popularity of this 20 year-old actor, recently officially confirmed as the second lead in the Indiana Jones IV movie that’ll start shooting in June, signify a multicultural turn in the road in mainstream American culture, at least among the under 25s? 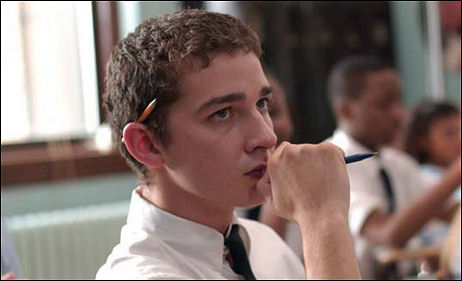 Shia LeBoeuf in A Guide to Recognizing Your Saints

He obviously has an exotic-sounding name — half Middle-Easternish, half French. (I’ll bet 97% of the people reading this right now aren’t 100% sure how to say it.) And yet LeBoeuf is something of a hot commodity, especially when you consider Disturbia‘s surprising $24 million haul this weekend.

This tells me that maybe the xenophobes who’ve told political pollsters they don’t like the idea of a U.S. president being named Barack Obama (i.e., because it ‘s not a whitebread American name) might not be as plentiful as I’d feared. Or at least that they might be confined to the over-45 age bracket.

It wasn’t that long ago, after all, when U.S. movie stars had to have names like Richard Gere or Tom Cruise or they’d be considered too “different” sounding and relegated to the sidelines.

There’s a slight problem, of course, if Indy IV director Steven Spielberg is going to cast LeBeoeuf as Harrison Ford‘s son. I say “if” — no one knows if this is the intention. But if so, problem #1 is that LeBeouf isn’t tall enough — 5’ 10 and 1/2 inches compared to Ford being six-foot-one. (Both my sons are taller than me.) Problem #2 is that LeBeouf looks like he doesn’t come from the same country as Ford, much less from the same gene pool. He obviously looks European (look at that French honker) and clearly hasn’t a trace of Ford’s Irish-Russian features.