Randy Spelling, David Weintraub and Sean Stewart — the young stars of a new Entourage-y reality show called Sons of Hollywood — are giving an excellent impression of being diseased and over-priveleged lowlife scum — representatives of the very thing that Islamic fundamentalists despise about western culture and values. I’m saying this because they need to consider and even accept this opinion because once they do, there is a chance for redemption. 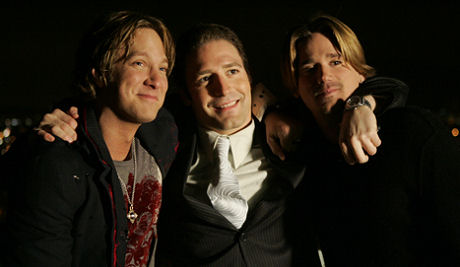 The producers of Sons of Hollywood need to fly these bozos to the mountains of eastern Afghanistan for a hand-to-hand combat with three Taliban fighters, or maybe just three poor guys who believe in the legend of Osama bin Laden. Make it a fight to the death with knives. If Spelling, Weintraub and Stewart are killed, it is the will of Allah. But if they kill the Taliban guys, then they’ll have my respect and they can fly back to Hollywood and act like spoiled assholes all over again and nobody will put them down ever again. I won’t, at least.