Spider-Man 3 (Columbia, 5.4) blows, according to Times Online critic Leo Lewis, delivering a three-stars-out-of-five review. Having caught the film at the Tokyo premiere, Lewis calls it “a daft, highly polished couple of hours of fantasy fun,” but that’s just a lot of blah-blah on his part. Read the damn review — Lewis has a sense of humor but he basically says it sucks stinking hairy dog balls. 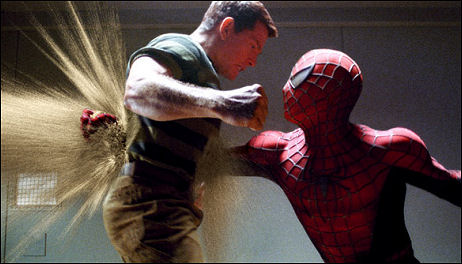 “The central theme of the film is that even superheroes can have a dark side,” he writes. Whoa….mind-blower.

“There is not enough of the super-villains and they are not nearly twisted enough,” Lewis says. “But then there never is and they never are. There are digital effects galore to remind us that Sony is a high-tech company, particularly when a new super-villain, Thomas Haden Church‘s Sandman, is transformed into a living sandstorm and pulverizes bits of Manhattan.

“At one point Tobey Maguire, who plays Peter Parker/Spider-Man, Church, James Franco and Topher Grace square off in a four-way clash clearly designed to satisfy all tastes in hairstyle, physical build and jaw-line. The imperilled Kirsten Dunst, meanwhile, barely registers.

“And for reminders that Japan, the home of manga comics, is an increasingly powerful influence on Hollywood directors there is an unmistakable homage to the anime classic Akira.

“Perhaps, more subtly, there are ample goodies aimed head-on at the female Japanese filmgoer, the most important demographic in what has become the world√É¬¢√¢‚Äö¬¨√¢‚Äû¬¢s second biggest box office. The hunk count is disproportionately high, the babe count oddly low.

“The challenge that Spider-Man faces from the Sandman — he learns of a connection with the murder of his Uncle Ben — a mysterious black substance has turned his Spider-Man suit black. It brings forth a darker side of Parker and Spidey that nobody has seen before when he is conveniently infested with an alien parasite.

“The problem is that even Spider-Man’s ‘evil’ side is still hopelessly mild- mannered. We are shown a montage of his sub-Mr. Hyde depravities. His hair droops over one eye; he swaggers along the street; he flirts with passers-by; his girl ditches him; and he makes an ass of himself in a nightclub. In short, he behaves like a textbook drunk on any given Saturday night.

“A horrifying glimpse into the unspeakable pit of the human soul this is not.

“Also disappointing is the inability of the director, Sam Raimi, to end the romp without a fleeting shot of the American flag. The Stars and Stripes just happens to be fluttering behind Spidey as he makes his triumphal return to honor, probity and good honest fist-fighting.”

The flag thing in itself is deplorable. I’m sorry to be the among the first to say this, but Spider-Man 3 may herald the temporary end of Sam Raimi. It may take him years to recover from this. If the reviews continue in this vein, Raimi is probably going to have to walk into the Southern California desert wearing sandals and carrying a Charlton Heston Ten Commandments staff and try to find his soul again.