Ten minutes into watching Stephanie Daley, I was experiencing that “okay, don’t worry, this is going to be very good” realization. But I was also feeling slightly on-edge because I wanted this moody, expertly realized drama to stay on-track and build and dig in and deepen and so on. And it did that. And the performances were killer. And then came the ending, which, to me, felt a little too ambiguous and a touch sudden, as in “wait…that’s it?” 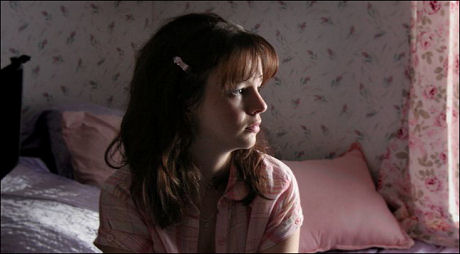 Endings are very, very important — you could argue that they’re almost the whole ball game — but Stephanie Daley is still one of the best solemn-and-sober women’s films I’ve seen in a long, long while. It is absolutely worth seeing on a Saturday or Sunday afternoon, or on a weeknight. It will not make you groan or slump in your seat, and the notion of checking messages on your Blackberry in the second act will most likely not come up.

I’m forecasting these reactions because Amber Tamblyn‘s performance as the title character — a 17 year-old high-school junior who may have murdered her baby — is awfully damn good. I’m not using the word “astonishing” because Tamblyn looks and behaves like any young girl with issues pressing on her heart and mind, but “exceptional” definitely applies. It’s almost all in her eyes — a haunted, gloom- ridden, terrified emotional state — and yet she’s immensely watchable, attractively so, every second she’s on-screen. I could call her performance ravishing, but I wouldn’t mean erotically. Talk about a face trying to hide surging currents…

15 months ago I wrote that Tamblyn “is now on the Big Map because of this film.” I added that “it’s too bad after giving such a finely textured dig-deep performance in Daley that she’s agreed to star in the lowballing Grudge 2, but I don’t think this matters. Millions have seen Grudge 2 in theatres and on the screen — a much smaller group will wind up seeing Stephanie Daley, but those who do will not feel in the least bit burned or toyed or fiddled with. It’s all in the mind of the beholder, and it’s a free country.

Stephanie Daley is basically saying that the acts of procreation and giving birth weigh heavily on the soul, and are not to be even considered by kids who are way too young and unable to handle the burdens. The right-to-lifers are going to get hold of this film when it comes out on DVD and show it to high-school kids. It plays right into their view of things, and honestly? I found myself acknowledging as I watched it that the right-to-lifers have a point. 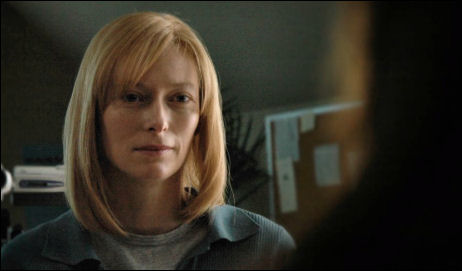 As the film begins the infant death has been discovered and Daley has been saying it was unintentional — that the infant was still-born. The newspapers have been calling her the “ski mom” because she gave birth to — unloaded — a 26 week-old fetus in a bathroom during a school ski trip, and the baby was later found dead in a garbage can.

Enter Lydie Crane (Tilda Swinton), a psychologist assigned to interview Steph- anie and advise the authorities whether or not she should be prosecuted. Crane herself is five months pregnant with a shaky marriage to a guy played by Tim Hutton giving her pause and some grief. (Except for anomalies like The Last Mimzy, it is axiomatic that all relationships with all characters played by Tim Hutton, rumored to be a Charlie Sheen-type hound in real life, are shaky — he has a face that says “alcoholic” and “likely to tomcat around given half a chance.”) Plus she gave birth to a stillborn child a year or so earlier.

This sounds like one of those only-in-the-movies set-ups, but it didn’t feel like a speed bump to me. Such is the level of craft and assurance that Brougher brings to Stephanie Daley. There’s also the beautiful photography by David Rush Morrison, and a kind of smooth painterly quality that seems to transform the innate gloominess of the material into something much more.

The plot isn’t stunningly original, but then again what is? Norman Jewison‘s Agnes of God (1985) was fairly similar, with Jane Fonda playing the older psychologist-investigator and Meg Tilley as a young nun who’d given birth and possibly killed the child. There’s also a 2004 novel by Jodie Picoult called Plain Truth, which is about a young Amish girl accused of killing her baby, and is also about a female lawyer with issues of her own who is assigned to look into the case.

Distributors were naturally scared by the baby-killing aspect, but First Look’s Ruth Vitale stepped up and entered into negotiations with the Stephanie Daley team out of Sundance ’06. But then “the deal got worse and worse” (or so says a person involved in the negotiations), apparently due to someone at First Look not liking the film as much as Vitale, and it all fell apart. Then Regent Releasing, lowballers who open films mainly to promote DVD traffic, stepped in.

Stephanie Daley has an 84% positive rating on Rotten Tomatoes. Salon‘s Andrew O’Hehir, a heavyweight critic, has called it “a major American film, announcing the arrival of an independent director who deserves all the hype.” Tamblyn won the Best Actress award at last summer’s Locarno Film Festival. Brougher won the Best Director award at the Jackson Hole Film Festival. It’s a woman’s film, sure, but the way-above-average pedigree should snag the attention of any half-serious filmgoer.

It’s now playing at Manhattan’s Angelika (subway sounds rumbling up from the floorboards!), and will open on 4.27 in Los Angeles at the Regent theatre — the stand-alone on La Brea, just south of Melrose. Daley will open on 5.11 in Boston, 5.25 in San Francisco, 6.1 in Chicago, 6.29 in Denver and yaddah-yaddah.