An alleged Orson Welles “masterpiece” called The Other Side of the Wind could finally reach theaters sometime in ’08, according to legendary director and Sopranos costar Peter Bogdanovich. A deal to edit and complete Wells’ final film “is 99.9% finished,” Bogdanovich said at an appearance at Orlando’s Florida Film Festival last Friday, according to a report on a site dedicated to Welles’s work.

“The Other Side of the Wind tells the story of Jake Hannaford, an aging film director played by John Huston, who is trying to make a film, albeit with great difficulty,” says an essay about the movie on Wellesnet.com. “He is surrounded by flunkies, journalists and wanna-be’s, many of whom are not so subtly patterned after people in Welles’ life.

Bogdanovich is actually a costar in The Other Side of the Wind, playing a char- acter named “Brooks Otterlake.” (An otter that swims in a lake…got it.) Other actors include Oja Kodar, Lilli Palmer, Edmond O’Brien, Mercedes McCambridge, Cameron Mitchell and Paul Stewart.

“There are few more tantalizing stories than those of unfinished films,” the essay says. “When it’s a director of Orson Welles’ stature, the stories only get bigger, the films more legendary.

“Kodar helped Welles with the screenplay, and thanks to her input, the film has a more explicit sexuality than any other film in Welles’ career. 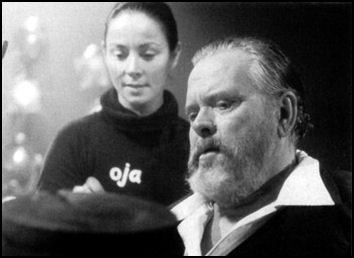 “Judging from the clips made public, the film promises to be Welles’ most radical and experimental work of all, and is sure to put off many. One report even has Oliver Stone claiming the film was too experimental. Welles planned on blending footage of multiple stocks and aspect ratios, which would create a collage effect, and with Welles’ bravura editing on F for Fake, the possibilities are endlessly fascinating for what he could (and did) have achieved with Wind.”