Today was a moderately good day until the hard drive on my relatively new Gateway laptop (a nice 17-incher with a 160 gig hard drive) hiccuped and froze up and was suddenly functional no more. “A bad hard drive,” the Geek Squad guy at B’way near Houston said about 90 minutes after I first realized I had a problem. No repairs, over and done with, tough luck.

I didn’t purchase unit-replacement insurance when I bought the Gateway for the second time last December (the first unit stopped putting out sound and had to be replaced), so I had to fork over big-time for a brand new unit. The Geek guy swore that Gateway laptops, despite my bad luck, are highly reliablle. Welcomely, the price has dropped to about $700 — down from $1100 five months ago — and of course the new one has Windows Vista rather than Windows XP.

A voice was telling me last November I should buy a Mac; I didn’t listen because I didn’t want to repurchase all the programs (FTP software, photo and video editing, etc.) and because the nice ones cost a good deal more, but I should have just sucked it in and bitten the bullet. If I had I wouldn’t be going through this crap right now. I vaguely disliked and certainly didn’t trust PC’s before today’s misfortune — my feelings are much more adamant now.

All the data and photos and e-mail is being transferred to CDs by that Geek Squad guy (it may take him until tomorrow morning) and I’m going to have to contact all the people I bought programs from and submit the required numerical data so I can re-download and re-install everything. I’ll hopefully be able to file a couple of stories tonight or certainly by tomorrow morning, but wont be back up to full groove speed for at least a couple of days, and more likely not until Thursday or Friday.

The hard-drive issue happened right before I was about to see Spider-Man 3 at the Lincoln Plaza. In Contention‘s Kris Tapley (fresh from a long coast-to-coast road trip) was with me. I’d been told by an IMAX publicist that passes would be waiting for the 5 pm show, but the staffers at the theatre couldn’t find any message or confirmation of this, and by the time they’d sorted it out the sold-out show had begun. So we went to see it a regular 35mm theatre, and then the shit started when I turned on the copmputer to check e-mails. Awful, awful, awful.

Thanks to Houston’s Michael Bergeron for passing along this shot of a pair of Hondo 3-D viewing glasses left over from the original 1953 release of this John Wayne film. (“Ain’t that a Shane?”) It was announced last week that the 3D version of Hondo will be screened at the Cannes Film Festival.

“I look at the people I meet. No one’s dying to have a lot of responsibility in their lives. Very few people are looking at life and thinking, ‘Gee, I wish there was another thing to occupy my time and energy.’ Our characters are definitely trying to avoid that type of thing.” — Knocked Up star Seth Rogen analyzing schlub culture in Sharon Waxman‘s N.Y. Times piece about Judd Apatow‘s focus on (and identification with) nerdy/schlub types in his films.

Can there be any doubt that it was American schlubs who contributed a significant portion of last weekend’s huge Spider-Man 3 haul? Apatow’s Knocked Up characters pointedly mention wanting to catch Spider-Man 3 in the film. Way to go, Judd and Seth…that’s really something to be identified with and be proud of.

“And The Winner Is” columnist and Oscar-race analyst Scott Feinberg had a look last month of a rough-cut of S.O.P.: Standard Operating Procedure, the Abu Ghraib/Iraqi War documentary from Oscar-winner Errol Morris (The Fog of War, The Thin Blue Line) that Sony Pictures Classics may not release until “sometime next year,” he says. Here‘s Feinberg’s report: 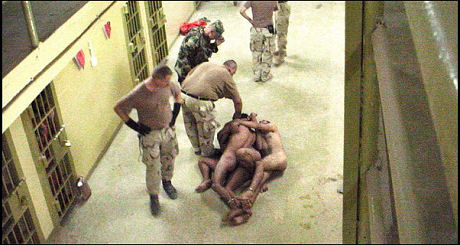 “Morris says he has a longstanding fascination with ‘iconic images,’ including the photo of the flag-raising at Iwo Jima that inspired Clint Eastwood‘s two latest films (Flags of Our Fathers, Letters From Iwo Jima), and most recently the photos of the Abu Ghraib prison abuse scandal, which [inspired Morris to make] this film.

“As always, Morris manages to get all the principle figures — Lynndie England, et. al. — to open up quite candidly about the roles they played in interviews that are made even creepier because they are shot using Morris’ Interrotron camera, which enables interview subjects to look directly into the camera while answering Morris’ questions.

“Although I haven’t seen every minute of the film — nobody has, because it’s not yet complete — I can say that it appears to have the makeup of an Oscar nominee. Aside from an Oscar nod, there are two potentially controversial things to look for whenever the film is released, probably sometime next year:

“(1) This film, in its current form, includes previously unseen, tremendously graphic, and uncensored photographs and cell-phone videos from Abu Ghraib — prisoners being forced to masturbate, touch each other, etc. Morris indicated that he and distributor Sony Pictures Classics, which has given him his biggest budget and complete creative freedom thus far, hope the film will be given some leeway by the ratings board because it is a documentary, but acknowledges that if it does come back with an NC-17 rating, he would probably cut it until it was an R rather than release it to such a limited audience; and…

“(2) Morris is not shy when it comes to expressing his opinions about the ‘pointlessness’ of and ‘lives wasted’ in Iraq. I know what he means so I don’t have a problem with it, but those who disagree will likely attempt to cast him as a Michael Moore-type extreme liberal.”

One comment: S.O.P. is complete enough to show to a journalist in April and yet Morris may not release it until ’08? What’s that about?