MTV News’ movie blog posted an exclusive yesterday about the biologically- inappropriate Nicolas Cage being cast to play 1920s Chicago crimelord Al Capone in Brian DePalma‘s The Untouchables: Capone Rising, which will begin shooting next October and come out sometime in late ’08. It’ll be a kind of prequel to DePalma’s The Untouchables (’87), which was about Eliot Ness (Kevin Costner) and Jimmy Malone (Sean Connery) trying to bust Capone (Robert De Niro) and his henchman. 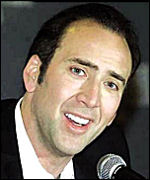 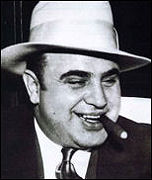 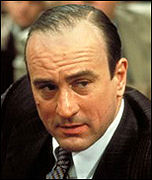 The really age-inappropriate aspect is that Capone Rising will be about Capone’s “early years” as a Chicago gangster, and the seeds of his relationship with Connery’s Malone character, who may be played this time around by Sean Penn or Colin Farrell. The Untouchables was also cast in an age-inappropriate way, not that DePalma or critics or general audiences gave a damn. I myself was part of that equation. DeNiro’s ferocious energy when he swung that baseball bat was quite a persuader.
And yet Al Capone was a young man in his gangster heyday. His Windy City career spanned 12 years, from his arrival in Chicago in 1919 at age 20 to his conviction for income-tax evasion in 1931 at age 32. The action in The Untouchables happens in the late 20s when Capone was the same age, and yet Capone was played by the 43 year-old DeNiro, who looked his age and a bit more.
Capone Rising will depict what Capone was supposedly up to during his first few years in Chicago, when the Real McCoy was in his early to mid 20s. And yet the “young” Capone will be played the 43 year-old Cage (i.e., born in January 1964), who also looks his age and will obviously be the same age De Niro was when he played the “older” Capone some 20 years ago.
This whole concept is flim-flammy from any kind of half-realistic vantage point, but of course we all let this slide 20 years ago because DeNiro didn’t look excessively old for the role (not that anyone knew or cared about the biological-historical particulars). But Cage is supposed to be playing a Capone who’s ten years younger than DeNiro’s “Scarface,” and yet he’s the same age and looks it. And he’ll be a good 20 years older than the real Capone was.
Many of the big-time Chicago gangsters in the Prohibition Days were flush with youth (or what passed for the stuff in the 1920s, when a lot of bad guys ate bad food and too much of it, and tended to party fairly hard). Big-time boss Dion O’Banion, born in 1892, was only 32 when he was rubbed out. Earl “Hymie” Weiss, born in 1897, was only 29 when he was killed in 1926. “Machine Gun” Jack McGurn, a key member of the Capone gang who was believed to be the principal shooter in the 1929 St. Valentine’s Day Massacre, was born in ’05 and died at age 31 in 1936. Eliot Ness was only 28 when Capone was convicted of income-tax evasion in ’31.