New Line Cinema held a press conference yesterday at the swanky Martinez hotel to promote The Golden Compass, a $180 million action- fantasy pic in the vein of….well, you know. It’s another attempt to deliver a heart-touching, visually-dazzling, all-ages family blockbuster, which is no crime. The director is Chris Weisz, and the costars are Daniel Craig (who showed up) and Nicole Kidman (who didn’t). 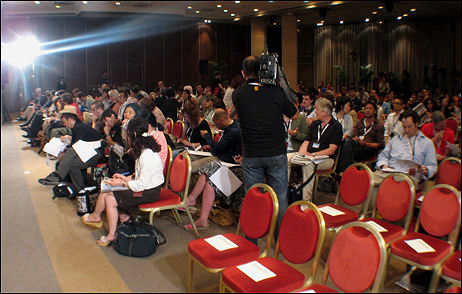 It’s a screen adaptation of Philip Pullman‘s novel, which is (what else?) the first book in a trilogy called ”His Dark Materials.” It’ll debut in early December. Here’s hoping it’s as good as The Lion, The Witch and the Wardrobe, which I thought was quite good. I shouldn’t say more, having missed the three footage screenings that New Line presented…sorry.
I left before it was over, and on my way out noticed a certain New Line executive dozing in his back-row seat in the Martinez ballrooom. We’ve all been there, especially those who’ve just arrived from Los Angeles.