Andrew Dominik‘s The Assassination of Jesse James by the Coward Robert Ford finally has a release date — 9.21.07 — and L.A. Times guy John Horn is reporting that there’s been a big backstage struggle about the film’s “tone and length — at one point its running time was more than three hours — according to several people close to the production.” 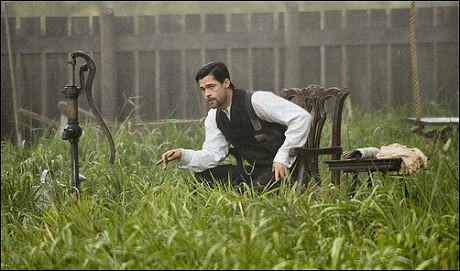 Remember that Kevin Williamson/Calgary Sun interview with executive producer Tony Scott I linked to several moths ago? Scott said that “we have to be careful how we market [Jesse James] because it’s like a Terrence Malick film.”

Stake in the heart! When I read that remark I knew the game was over. The suits regard Malick-type films as strictly for the critics and the elites — too pastoral and picturesque, too much meditative muttering — which means they’re probably going to bitch about it and try to mongrelize it and then they’ll underfund the marketing so they can get rid of it and send it off to DVD.

The key challenge, reports Horn, “was to come up with a cut of The Assassination of Jesse James by the Coward Robert Ford that satisfied audiences and Warner Bros., the studio making and distributing the film. At one point there were competing versions — one from writer-director Andrew Dominik and another from producer and star Brad Pitt, according to a person familiar with the making of the movie. It’s unclear which version of the film will be released.”

Note to Warner Bros. marketers: remember your Departed game plan and keep this film out of the dreaded Toronto Film Festival. If the critics love it the public will get the idea that it’s really an arthouse film and then it’ll make even less money.