The big Cannes buzz right now is around the untitled (and apparently still uncompleted) Larry Charles/Bill Maher documentary about religion, which is being repped by CAA and IM Global. Charles himself attended a market screening yesterday to unveil footage, I’m told. I wasn’t there but a trusted friend was, and he says that “what the buyers saw had everyone laughing hard” and that once out and about, the doc will definitely register as “controversial.” 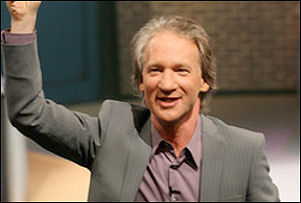 Mr. Friendly is predicting “a bidding war and an announcement within a couple of days.”
Variety‘s Adam Dawtrey reported about the doc last February during the Berlin Film Festival. “In the aftermath ofBorat,” he wrote, “one of the most intriguing projects to surface at Berlin’s EFM is the untitled Larry Charles doc being touted by First Look Int’l. It features Maher in a satirical investigation of the major global religions and sounds calculated to invite letter bombs from fanatics of every creed.
“Charles and Maher have already been shooting for some time below-the-radar in the Mideast and London,” Dawtrey went on, “but footage is being kept tightly under wraps. Pic is being hyped as Borat meets Fahrenheit 9/11, but the only materials that buyers are allowed to see is a single sheet written by Charles, which isn’t permitted to leave the First Look office.
“‘Is religion an obsessive-compulsive disorder?’ asks Charles, who bills his movie as ‘Bill Maher vs. the Anti-Christ (or is Bill Maher the Anti-Christ?)”