I’ve now seen Juan Antonio Bayona‘s The Orphanage twice, which is perhaps an irresponsible thing given all the movies and events to be absorbed at the Cannes Film Festival. But it’s such a deliciously haunting and rousingly effective work that I couldn’t resist. Joel and Ethan Coen‘s No Country for Old Men is the best all-around film I’ve seen here, but The Orphanage is a very close second (with Michael Moore‘s Sicko and Michael Winterbottom‘s A Mighty Heart running third and fourth). 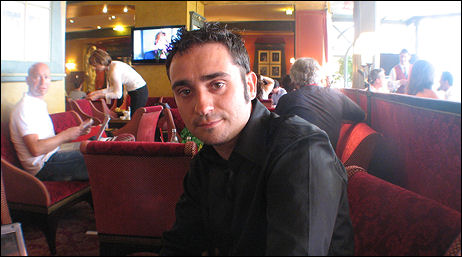 Produced by Guillermo del Toro, The Orphanage is hands down the creepiest sophisticated ghost story/thriller to come along since Alejandro Amenabar‘s The Others, and if you ask me (or anyone else who’s seen it here) it absolutely deserves a ranking alongside other haunted-by-small-children classics as Jack Clayton‘s The Innocents and Nicolas Roeg‘s Don’t Look Now. It also recalls Robert Wise‘s The Haunting, although the ghosts in that 1961 film were all over 21.
Bayona, whom I spoke to a couple of hours ago at the Majestic Hotel, is the newest addition to the current pantheon of Spanish-language directors (most famously repped by Del Toro, Alfonso Cuaron and Alejandro Gonzales Inarritu) who have made — and will hopefully continue to make, if they don’t allow the Hollywood flotsam-jetsam effect to dilute their focus — the most full-spirited and excitingly crafted films of our time. This is all the more wowser knowing that The Orphanage is Bayona’s first feature.
I was told this morning that Bob Berney‘s Picturehouse is planning to open The Orphanage sometime in early ’08. Due respect, but that feels like the wrong call. It should definitely open before the end of the year to qualify in the Best Foreign Language Film category as well as the various critics’ awards. (If I were calling the shots I would open it in late October.) This adult-level, mostly gore-free chiller is so many cuts above the crude horror films of our day (i.e., the Lionsgate torture-porners and slasher films) that their fans may feel moderately ashamed after seeing it. Or at least wised up. 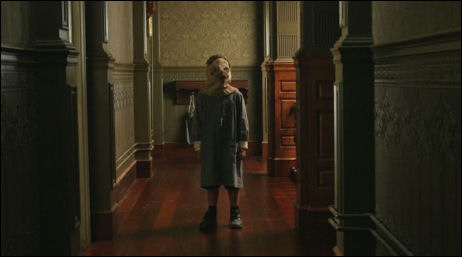 Written by Sergio G. Sanchez, The Orphanage is a close stylistic and thematic cousin of Del Toro’s Pan’s Labyrinth as well as Henry James‘ “The Turning of the Screw.” It’s about nocturnal, other-worldly imaginings taking shape and governing destinies inside the heads of young children — a kind of nightmarish “Peter Pan” tale about (as Variety‘s Justin Chang has observed) “a grown-up Wendy figure grieving her lost boy.”
Laura is a mother in her early ’40s (Belen Rueda, last in The Sea Inside) who is running an orphanage for disabled kids with her husband Carlos (Fernando Caya). She is doing this partly as a way of communing with her childhood since she herself was raised there. But there are residual forces at work in inside the old house, and they have their strongest effect upon Laura and Carlos’ excitable young son, Simon (Roger Princep), who is soon reacting to and then conversing with a small group of young tyke-sized ghosts. We soon learn they’re remnants of kids who suffered a bruising trauma when they were living in the orphanage roughly 30 years earlier.
The film’s two key events are Simon’s sudden disappearance one day, and then Laura’s increasingly manic and desperate attempts to find him (even if that means venturing over to “the other side”) and bring him back. I’m not going to recap any more of the story, but there are at least two heavy-jolt scenes that result — one in the second act, and one in the third. They are worth it, trust me — especially the latter, which gives you the serious chills by panning back and forth between Laura and her five or six visitors during the playing of a childhood game. 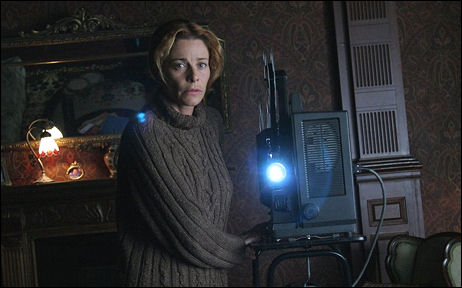 What 97% of today’s horror filmmakers don’t get is that it’s not the number of “scares” that matter as much as the effective delivering of seriously creepy mood. Bayona, trust me, knows how to play this game and then some. Cheers also to Oscar Faura for his shadowy widescreen photography, which captures it all just right; ditto the economical work by editor Elena Ruiz, and the very pronounced and melodramatic orchestral score by Fernando Velazquez.
Again, here’s the Bayona interview from earlier this afternoon.