I’m just sitting here in the Orange Cafe, blowing off screening ops and trying to catch up (I didn’t file enough stuff yesterday, due in part to the time-swallowing Jerry Seinfeld Bee Movie presentation followed by two late-in-the-day screenings and then a decision to just go for dinner and forget the damn column already) and waiting for Joel and Ethan Coen‘s No Country for Old Men. 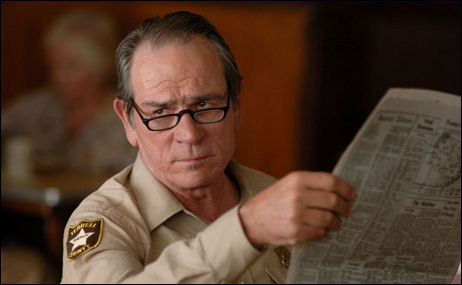 Tommy Lee Jones in No Country for Old Men

Only three hours and fifteen minutes remain until the the first Cannes screening, set to unspool at the Salle Debussy, begins at 7:15 pm. I’ve been trying to think of other things and not succeeding. I read the Coen’s adaptation of Cormac McCarthy‘s novel earlier this year and found it hard, honed and melancholy, and fortified with a theme (i.e., the dissovling of decency and moral fibre in American culture) that sinks in. Cannes press conference host Henri Behar told me this morning that he worked on the French subtitles, a chore that required his seeing it many times, and says also that it’s “brilliant.”