“We Own The Night”

I was hoping for something much sharper and smarter from James Gray‘s We Own The Night, which showed at the Cannes Film Festival on Thursday, and which Columbia will be releasing stateside sometime later this year. It’s a slam-bang urban action piece by way of a Brooklyn family-ties melodrama…the kind in which everyone bellows their feelings. It’s good to see Gray back on his feet after years in movie jail (his last film was The Yards, which opened seven years ago) but this is too often a crude, unsubtle, difficult-to-digest film. 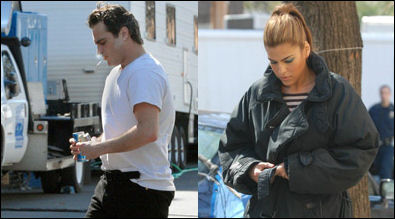 I’ll tell you right now that there’s a mild spoiler or two in this piece.
The most recent high-water marks for family crime films, in my book, are The Sopranos on HBO and The Departed. Gray’s film is nowhere near this league. As vigorous and heated as Night obviously is (the two most thrilling scenes are an invasion of a Russian-mafia cocaine apartment and a car chase/attack scene in the driving rain), the writing is thick and pulp. The story felt imposed upon the characters rather than characters driving the story. I kept getting the feeling that the dialogue wasn’t quite there on the page so the actors were improvising all through it.
A “friend” of the film argues that “what [they] were going for was an archetypal throwback to ’70s filmmaking rather than the more complex literariness of The Sopranos. This is not a ‘modern√É¬¢√¢‚Äö¬¨√Ç¬ù film’ — it has no metacommentary going on, amd has no literary aspirations. The Departed was complex to a fault (there are several scenes toward the end of that movie that make no sense, but no one cares because it√É¬¢√¢‚Äö¬¨√¢‚Äû¬¢s so fun.”
I got into a friendly debate yesterday with this guy, so here’s a list of my quibbles along with his counter-arguments:
Joaquin Pheonix‘s Bobby — a nightclub owne-manager in denial about his familial affinities to a tribe of New York cops, including a hard-nosed detective brother (Mark Wahlberg) and an equally hard-nosed dad (Robert Duvall) — is highly dislikable for the way he refuses to let girlfriend Eva Mendes be involved with anything important– he seems to just wants to fuck her when they’re alone and that’s it.
Counterpoint: “You didn√É¬¢√¢‚Äö¬¨√¢‚Äû¬¢t get the impression that Bobby really loved Amanda but knew that his family (who are quasi-racist, remember) would never let her into the fold because she’s a party girl? Bobby sort of knows deep down she’s just not constitutionally able to be a cop√É¬¢√¢‚Äö¬¨√¢‚Äû¬¢s wife.”
Would the wounded Wahlberg, admitted hours earlier into a hospital for bullet wounds, have blood oozing out of his cheek and his hair? Don’t hospital staffers constantly dress wounds to keep everything as sterile and germ-free as possible?
Counterpoint: “Wahlberg√É¬¢√¢‚Äö¬¨√¢‚Äû¬¢s post-gunshot look is absolutely real. [The filmmakers] did a ton of research — there was a doctor who worked in ICU in the 80s advising. But if it doesn√É¬¢√¢‚Äö¬¨√¢‚Äû¬¢t play. it doesn√É¬¢√¢‚Äö¬¨√¢‚Äû¬¢t play.”
I know Pheonix has been keeping his family ties a secret in the beginning, but would the Russian mob guys be so stupid as to not have a clue that Wahlberg is his brother?
Counterpoint: “This is the pre-internet age” — Night is set in 1988 — “when people could absolutely keep their familial connections at arm√É¬¢√¢‚Äö¬¨√¢‚Äû¬¢s length. In fact, James based Bobby√É¬¢√¢‚Äö¬¨√¢‚Äû¬¢s character on a real guy who hid his cop connections. Remember also that he had worked is way up from bartender to manager so there would be zero suspicion. Also, the Russians weren√É¬¢√¢‚Äö¬¨√¢‚Äû¬¢t cunning — they were just brutally violent.”
“Would Jumbo, the big tough guy who excels at beating other guys up, really collapse and start weeping like that when Pheonix starts to lean on him, and when the cops grill him?”
CounterpointVadim Nezhinski — what is that, some kind of perverse mirror-image identity of Njinsky, the famed ballet dancer? The movie is full of little “what the fuck?” irritants.
Counterpoint: “I think the fact that these details irritated you is a sign that you just did not buy into the more operatic core emotions this movie is selling.
“Those critics for whom the movie is properly positioned I think will appreciate the movie√É¬¢√¢‚Äö¬¨√¢‚Äû¬¢s lack of irony and gratuitous hyper-reality. This is a very basic story where a lot of the emotions are laid bare. We are hoping that because of the car chase, the overall level of detail, and the deliberateness, critics will key in to the Friedkin/Visconti reference points and not judge the movie against a winking movie like The Departed, which I think sometimes gets confused with √É¬¢√¢‚Äö¬¨√ã≈ìsmartness√É¬¢√¢‚Äö¬¨√¢‚Äû¬¢ and √É¬¢√¢‚Äö¬¨√ã≈ìsharpness√É¬¢√¢‚Äö¬¨√¢‚Äû¬¢ but can sometimes exist in an emotional vacuum.
“The most ironic thing of all is that in research screenings The Departed never tested above a 65 (top two boxes — excellent and very good) whereas We Own The Night has tested in the high 80s. So [the team is] definitely confident about word of mouth. Good Night and Good Luck tested at 48; Monsters Ball got a 23 (norms are about 65); In The Bedroom at 25. And then reviewers told audiences those movies were brilliant so they wound up with great exit polls and word-of-mouth. Sheep…”