I was genuinely unnerved last night — okay, somewhat scared — as the heavy-creepy stuff began to happen in Mikael Hafstrom‘s 1408 (MGM, 6.22). Roughly 30 minutes in, and people to the right and left of me were feeling it also. This is good, I said to myself. I’m feeling queasy and anxious and insecure, and I’m generally immune to the crap that scary movies tend to push. 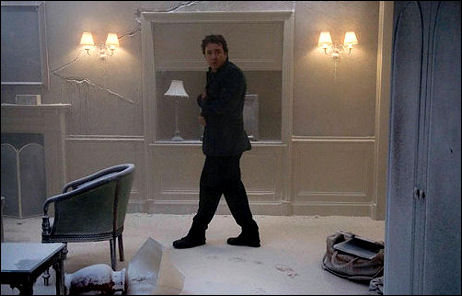 The difference is that 1408 isn’t peddling the usual usual — not your typical torture-porn, anything-goes, too-bad-if-it’s-not-credible shocker stuff, but seriously chilly vibes that are rooted in a believable psychological state that’s eating away at the main character. This, for me, is what makes it all workable and palatable, and that means it’s going to do pretty well. I mean, I’d be really surprised if it doesn’t.
An adaptation of a Stephen King short story, 1408 is primarily a one-set spook show with John Cusack as a paranormal book writer facing all kinds of demons (including his own) inside a haunted Manhattan hotel room. He gives something close to a one-man performance. But one of the things that scared me the most has to do with a roll of toilet paper. I just wanted to say that — a roll of damn toilet paper.
Entertainment Weekly‘s Owen Gleiberman has written that 1408 “doesn’t pretend to be a seismic Stephen King movie like Carrie or The Shining.” Except 1408 is a whole lot scarier than The Shining. They’re both haunted-hotel flicks but they exist in fairly different realms, and I prefer 1408‘s. Save for a few special effects moments, its main order of business is serving up old-fashioned fright. Something being in a room, and nobody knowing when, why or how the thing is going to happen and scare everyone shitless.
Eli Roth would probably be a little bit bored by this film, and I think that’s wonderful.
By the way: King apparently got the idea for 1408 from a real-life experience of parapsy- chologist Christopher Chacon when he visited room # 3502 at the Hotel del Coronado in Coronado, Calif.. He may have encountered the ghost of Kate Morgan, who died in the hotel in 1892 under dark circumstances. Chacon has described his visit to room # 3502 as a “classic haunting.” Using infrared cameras to track magnetic fields, humidity, temperature fluctuations and electronic emissions, he found 37 abnormalities in one day.