Here’s a trailer for James Mangold‘s 3:10 to Yuma, the Russell Crowe-Christian Bale western.that’s said to be very solid in a back-to-basics, character-driven sort of way. Lionsgate is tentatively planning to release it on October 5. That will make it the first Crowe pic of the season, the other being Ridley Scott‘s American Gangster, due to open on 11.2.07. 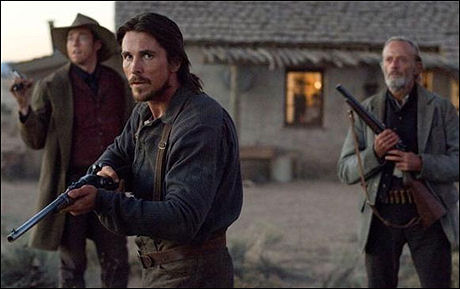 Mangold is a first-rate director. If anyone can re-resuscitate the western….well, it may be un-resuscitable as a genre but I’ve been told that Yuma is extremely sturdy and well-crafted.
My only problem, looking at the trailer, is with Bale, who looks excessively greasy and scuzzy — too much so in my book. I mean, he’s supposed to be the good guy and he looks like a lowly cowhand at best, and a derelict at worst. We live in a post-modern world with no hard moral boundaries, which means that secondary character-definers are everything — conviction, personality, attitude, personal hygeine.
And to me, Crowe — the Yuma bad guy — seems much calmer, cooler and more collected than Bale, who not only looks anxious and uncertain, but looks like he’s taken a daily bath in chicken grease. Crowe looks rugged but with a low (bordering on non-existent) chicken-grease factor.
I’m not trying to be a jerk, but I have a problem with anyone who looks too sweaty or scuzzy in a film. I think most of us feel the same way. I can’t get behind a supposed hero who has yellow or missing teeth or whose hair appears overly germ-infested or anything along these lines (i.e., long ear hair strands, long chunky Nosferatu-style toenails, beetle-size zits and blackheads). A western hero can look scruffy like Kevin Costner in Open Range or Clint Eastwood in Unforgiven, but if he’s too chicken-greasy the whole contract goes out the window.
Mangold recently told Total Film mag that Yuma‘s final gunfight is “a wild ride, but an analogue wild ride. We left our computers at home. It’s gritty and intense and handheld.”