In late ’04 (two and a half years ago) Wes Anderson was the big-cheese auteur with his latest film, The Life Aquatic, about to open, and by anyone’s yardstick a kind of imposing older-brother figure. Noah Baumbach, obviously, was the new kid on the block — Anderson’s up-and-coming screenwriting collaborator (on Aquatic) whose second film as a director-writer, The Squid and the Whale, was unseen and awaiting its debut at Sundance ’05. And yet Anderson’s film was soon regarded as a disappointment; three months later Baumbach’s was seen as anything but. 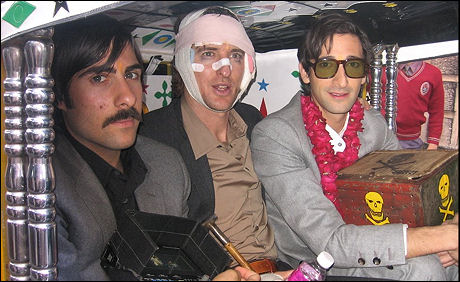 Having seen that Margot at the Wedding trailer and having read Anderson’s The Darjeeling Limited (another signature Wessy head-trip flick — quirky humor, odd eccentricities, three brothers on an adventure, father issues, an exotic train ride across India), I would say Anderson and Baumbach’s dynamic has changed.
At the very least Baumbach is standing on his own turf now, and doesn’t seem to be as locked into a stylized attitude trajectory as Wes still seems to be. I should just shut up, I know, and this is hardly an original thought, but I still feel that Anderson needs to rediscover or re-combust the freshness of spirit he and collaborator Owen Wilson had in spades in the mid to late ’90s when they made Bottle Rocket and Rushmore.
Boiled down to basics, I’m still picking up jaded vibes from Anderson camp (i.e., the ones that started to be noticed when journalists began writing articles about the Manhattan tailor who, per specific instructions, cuts Wes’s suits a little tighter and shorter than the norm) but not necessarily from Baumbach’s. I say this, again, knowing next to nothing about Margot or about their collaboration on that animated (stalled?) Raold Dahl fox-and-the-chicken-coop movie.
Fox Searchlight will be opening The Darjeeling Limited on 12.25.07.
Obviously I’m not the only one to remark that Andersonville has been imploding since the days of The Royal Tennenbaums, but maybe the Anderson undercurrents have shifted in ways I’m not aware of and the Wes fans are processing things in a different light.
All that said, I’m still a raging admirer of Anderson’s American Express spot… hilarious, amazing choreography, exactly “right.”