For some unfathomable, better-left-unexplored reason I went to an L.A. Film Festival screening a few hours ago of a newly colorized version of 20 Million Miles to Earth (1957), which will come out on DVD on 7.31.07. I came out with the bitter knowledge that I’d just pissed away 90 minutes of my time on this planet because I liked the movie when I was a kid (i.e., when I had no taste) and because I was curious how good or bad this newly colorized verison might be. 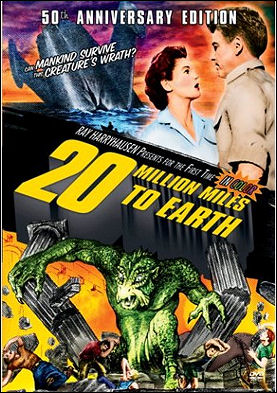 The colorizing, personally supervised by stop-motion animator Ray Harryhausen, looks like an attempt to imitate over-saturated 1950s-style color and as such isn’t half bad, but of course all colorizing makeovers are bad regardless of the care and skill involved. (The upside is that the DVD will reportedly include the original black-and-white version in both 1.33 to and 1.85.)
The film itself gets more ludicrous each time I watch it. It’s hard to know where to begin because every single aspect of this film is amateurishly, sometimes comically “off” in one way or another. I can only surmise that the director, Nathan Juran, was some kind of shameless, talentless, low-budget monster-movie stooge.
Each and every line of Christopher Knopf and Robert Creighton Williams‘ dialogue is somewhere between painful and inept. Each and every actor (William Hopper, Joan Taylor, Frank Puglia, Tito Vuolo, et. al.) seems to doing parodies of clueless, stiff-necked 1950s-style line deliveries. The creature — an ugly green reptile with big whiskers and the arms and torso of a gay body builder down at Gold’s Gym– has no genitalia or waste-disposal orifices. Taylor’s character (i.e, “almost a doctor”) runs down a dirt road in Sicily to attend to an emergency situation wearing black high heels. An American child actor (Bart Braverman) pretends to be a Sicilian kid by imitating Robert Blake‘s Mexican lottery salesboy accent in The Treasure of the Sierra Madre. 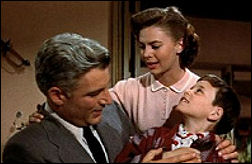 William Hopper, Natalie Wood in Rebel Without a Cause

And one thing about the colorizing is plain stupid. Hopper, the son of columnist Hedda Hopper, had prematurely white-gray hair in the ’50s and never attempted to hide this. It’s unmistakably gray (mixed in with some black) in his performance as Natalie Wood’s pissy dad in Rebel Without a Cause, and yet the 20 Million Miles to Earth colorizing team decided to make his hair light-brown sandy. Not quite on the level of some technician’s decision in the mid ’90s to make Frank Sinatra‘s eyes brown in a colorized version of Suddenly! (1954), but pretty close.