The hottest Esquire cover in several years, perhaps decades. I bought a copy in Newark airport last week, but until yesterday a thumbnail capture wasn’t viewable on the Esquire site….slackers. 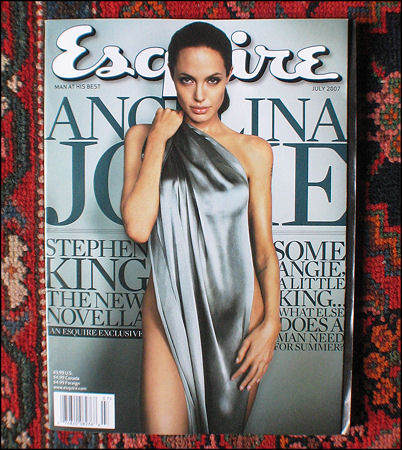 The Jolie cover, of course, in no way makes up for the magazine’s (and particularly editor A.J. Jacobs‘) surreal, shark-jumping, bordering-on- deranged obsession last year with Scarlett Johansson. Esquire has been on indefinite probation status because of this. If it weren’t for those “What I’ve Learned” pieces, I would be boycotting the magazine right now over this. The only thing that will make up for the Johansson fixation right now is an online mea culpa statement from Jacobs and an apology from the editors.
Joe Queenan said it in the Guardian last December and I tried to explain the same thing last March: Johansson is over. Until she lucks into another semi-startling, Match Point-level part or re-invents herself in some other way.
Johansson’s acting repertory, Queenan said, “consists of staring intently at the person she is speaking to, keeping her lips spread apart, and hoping no one will notice that she is no threat to Meryl Streep, and not all that much of a threat to Hilary Duff.”