Evan Almighty (Universal, 6.22) had a big family-style premiere and after-party on the Universal lot last weekend, and a friend who attended says “it’s funny and entertaining, but it’s basically a pro-environment rip on the Republicans and — if you want to take it this far — the self-serving politicians who didn’t build the New Orleans levees properly, which is what made Hurricane Katrina so devastating. 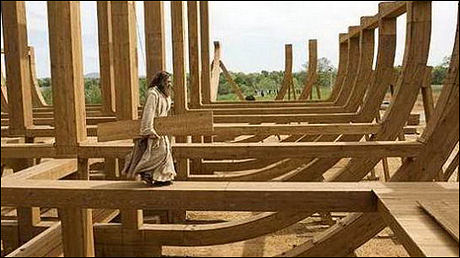 There’s a third-act plot spoiler coming three paragraphs from now…fair warning.
“Kids and families will love it, the special-effects are great, and It’s just a really nice alpha-vibe, do-good, love-the-earth movie. The theme of the movie is ‘ark’ — acts of random kindness.
“Steve Carrell is very funny and Morgan Freeman delivers his usual smooth professional job, but they gave all the best laugh lines – disbelieving skeptical reacton lines — to Wanda Sykes, a black comedienne. There’s a funny visual riff on one of Carell’s earlier films, but I won’t tell you what it is. This is only a 90 minute movie, by the way, which makes it even more kid-friendly, or tyke-friendly.
SPOILER: Freeman’s God calls upon Carell’s Congressman to build the ark to prepare for the big rains on September 22nd.” (Why that date in particular?) “And then the rains come and then…perhaps I shouldn’t say. Suffice that the real focus of this film isn’t God’s wrath but Man’s greed. It turns out there’s been a man-made dambreak that causes this gigantic flood, and it’s mainly the fault of a pro-business Congressman played by John Goodman who’s been helping his fat-cat pallies buy lots of land in parks and then winking at their short-cut moves (i.e., not building a dam properly).
“This movie is a throwback to the Oh, God movies,” the observer says. “The end result is always that the main character — Carrell’s, in this instance — becomes enlightened.”