Former Tennessee Senator Fred Thompson “isn’t a moral authority on anything, he just plays one on television. He isn’t famous for anything he ever did in politics. These days he is just someone else in America famous for being famous, even as a supporting actor,” N.Y. Daily News columnist Mike Lupica wrote today. 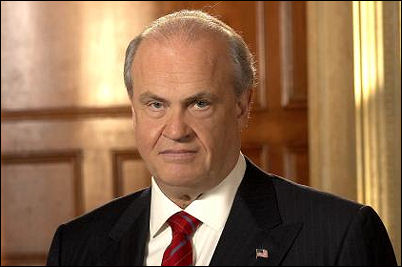 I didn’t watch last night’s Republican candidates debate, but as I read Lupica’s article I realized with some embarassment that for the flimsiest of reasons I feel slightly more comfortable with Thompson as a Republican presidential candidate (even though he hasn’t announced) than I am with Rudy Giuliani, John McCain or Mitt Romney.
As lame as it sounds, I feel less rattled about Thompson than the other guys. If, that is, a Republican candidate was absolutely fated to win the ’08 Presidential election (which almost certainly won’t happen…right?) and I had to choose the least problematic contender.
There’s something about Thompson that’s vaguely soothing. That deep baritone voice and easy-going County Sheriff speaking style that made him a favorite on Law and Order, and which provided steady acting work in films like Marie, A True Story (in which he played himself), Die Hard II, Cape Fear, In The Line of Fire and The Hunt for Red October. It’s dopey, but this is my honest gut reaction.
“Maybe it was inevitable that somebody would try to run straight from a long-running series all the way to the White House,” Lupica notes. “Or maybe Thompson thinks he’s ready to lead the free world because he plays President Ulysses S. Grant in the current television adaptation of Bury My Heart at Wounded Knee.
“This all started a half-century ago when we had a President, Jack Kennedy, who looked and lived and carried himself like a Hollywood leading man. Then 20 years later came Ronald Reagan, who went from acting to governor of California and finally to the White House. Now there are people who have urged Martin Sheen to run for some kind of office because his heart seemed to be in the right place on The West Wing and he did a good job delivering Aaron Sorkin‘s speeches.”