The waiting-in-line-at-the-Grove-to-pick-up- an-I-Phone-on-opening-day story turned out to be a dud. Not that many bodies, no shoving or pushing or raucousness of any kind, nobody shouting “open the doors!” Just 70 or 80 nice people sitting on the curb and on fold-up chairs, waiting patiently under the hot early-morning sun and…you know, quietly shooting the shit or reading or checking e-mails on their I-Books or soon-to-be-yesterday’s-news handhelds 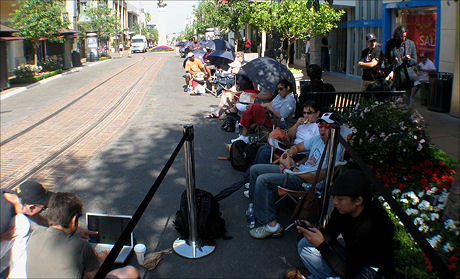 A couple of TV news guys and two or three Apple flunkies were standing around outside the door. I was doing the same and asking myself, “Why did I come here?” It was nothing….a big zero.
The first I-Phone hounds arrived last night but were told to leave by Grove security. The second wave arrived at 5 a.m. but were also told to leave. A uniformed security guy told me the line was permitted to form at 6:30 pm. At first people weren’t permitted to unfold and sit on their lawn chairs…but then Grove security backed off and said “okay.” Grove security also passed out free loaner umbrellas and bottles of Smart water to any “waiter” than wanted either one.

June 29, 2007by Jeffrey Wells28 Comments
« Previous post
“Lions for Lambs” trailer
Next post »
Dahl and “You Kill Me”