LAFF opener, “Talk To Me”

Tonight the L.A. Film Festival begins with a 7:30 pm screening of Kasi Lemmons‘ Talk To Me (Focus Features, 7.13.07), followed by an under-the-stars Westwood street party with everyone drinking, schmoozing and milling around. 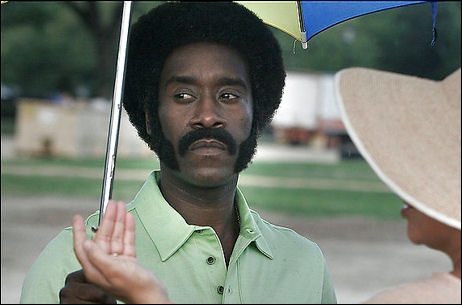 Talk To Me is about the late Ralph Waldo “Petey” Green (Don Cheadle), a Washington, D.C. TV and radio talk show host who started out as a run-around, a drug addict and a prisoner in Lorton penitentiary. But he gradually made it into broadcasting and used his mike to speak out against poverty and racism in the late ’60s, etc.
Sounds flat, doesn it? The turht is that I’ve been reluctant to go to the film because it sounded like a glowing tribute film to an African-American hero figure who stood up and confronted the racial issues of his day, but a friend tells ime it’s a lot looser and funnier than that — a “people film” that doesn’t play self-important. Anyone seen it?