“Margot at the Wedding”

Variety columnist Anne Thompson has put up a web-exclusive trailer for Noah Baumbach‘s Margot at the Wedding (Paramount Vantage, 10.19.07). Obviously a smart, sharp dramedy about screwed-up relationships — high on my list of want-to-sees and (I would guess) an almost certain ’07 Toronto Film Festival attraction. Scott Rudin (naturally…this is home-turf material) is the producer. 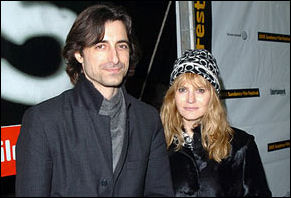 Hey, does anyone have a PDF script they can send me?
Nicole Kidman and Jennifer Jason Leigh play sisters, with the basic story being about Leigh’s concerns and second thoughts about her plan to marry Jack Black, who (judging from the trailer) is playing another hilariously mouthy, pushy, egocentric type. Thompson says she’s been told that Kidman (who is obviously playing the Laura Linney role here — a successful neurotic writer) comes off as” tough” and “not always sympathetic.”
Is this going to be Jack Black’s Terms of Endearment role? Will he ever have such a role and shift into the realm of serious emotional delivery, or is he too immersed in the personality of a renegade shtick artist? I’ve read elsewhere that Black “is not specifically playing funnybones” in this film, and that his character — a guy who has trouble listening to anything except the sound of his own voice –” is going through his hassles and trying to make sense of things.” Wait…that description applies to several thousand people I could mention.