I’ve always gotten a goofy kick out of Howard Hawks‘ Land of the Pharoahs (1955), which has an upcoming 6.26 DVD release. One reason is that a presumably half-drunk William Faulkner helped write the script. I don’t know of any eyewitness accounts of Faulkner’s behavior during this period, but if you were Faulkner wouldn’t you booze it up if you were stuck writing an ancient Egyptian costume flick? 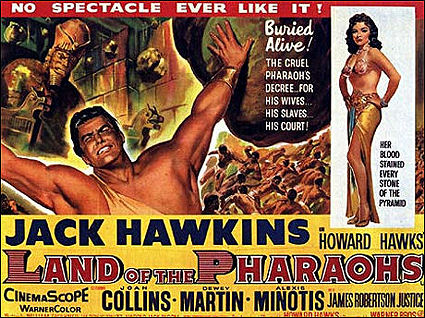 Here are four more reasons: (1) those slinky bikini-harem costumes worn by costar Joan Collins (only 21 at the time of filming, and allegedly referred to in mid ’50s industry circles as “the British Open”), and the way Jack Hawkins, as the Pharoah Khufu, tears off her covering veil in an early scene, (2) Dimitri Tiomkin‘s grandiose, slam-bang musical score, (3) Hawkins’ tough-guy performance as an arrogant man of action, and (4) the finale that has a crying, screaming Collins (“I don’t want to die!”) realizing she’s been tricked into being buried alive inside Khufu’s pyramid.