New Yorker critic David Denby has called Lajos Koltai‘s Evening (Focus Features, 6.29) “one of the rare movies that are too sensitive for their own good.” My sentiments exactly, I’m afraid, except for Denby’s use of the word “rare.” Movies that overdose on moist-eyed sensitivity are almost a genre unto themselves. 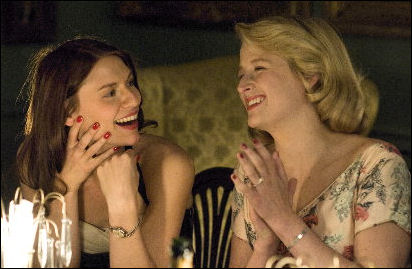 I’m not speaking of chick flicks precisely, but…well, yeah, I mostly am. Episodic chick flicks about suffering that isn’t alleviated until the characters have gotten old or died in some sudden or painful way, or variations of same written by gay guys, or super-sensitive-couples-in-trouble movies, or ones about sensitive families coping with the tragedy gene (i.e., The Virigin Suicides).
Movies that are too much in love with the notion of its characters (i.e., which are often middle-aged women or gay guys, and occasionally teenaged boys) as gentle reeds in a raging river. Movies that not only wear their exquisitely sensitive natures on their sleeves, but use them as soporifics or sedatives. So much so that 20 or 30 minutes in your inner child is crying out for the stern hand of Michael Bay or Eli Roth or Brett Ratner.
There’s a very slender line between sadistic sensitivity and sensitivity that seems genuinely caring and welcome and appropriately applied. The former is about pushing sensitivity while the latter seems to more into letting it happen at the right times and according to the rules of human nature.
Rodrigo Garcia‘s Nine Lives and Herbert Ross‘s Boys on the Side do it right; Michael Pressman‘s To Gillian on Her 37th Birthday and Michael Mayer‘s A Home At The End of The World (novel and screenplay by Michael Cunnigham) do it wrong.
The Hours, which was adapted to the screen by David Hare but based on a novel by Evening‘s screenwriter Michael Cunningham (again!), tried to smother its audience in the goo of massive grief. The mantra of that film was “we’re really hurting — feel our pain,” and the reason some people wet themselves over this film is that it refused to let up. I wasn’t relieved when Nicole Kidman‘s Virginia Woolf finally drowned herself — I was overjoyed.
The United States of Leland, the Ryan Gosling drama about a juvenile who’d killed a young boy, was certainly guilty of laying it on too thick.
Alan Parker‘s Shoot The Moon (’82) was, in my judgment, about a world of adult relationships that was almost grotesquely prickly-sensitive.
I once read a Bo Goldman screenplay called Monkeys, based on a novel by original Evening author Susan Minot, and the sensitive vibes that came out of that script felt like longshoremen poking their fingers in my neck.
Other offenders off the top of my head: Rob Reiner‘s The Story of Us, Rose Troche‘s The Safety of Objects, Jocelyn Moorhouse‘s A Thousand Acres (referred to by press junketeers as “A Thousand Minutes”) and Shainee Gabel‘s A Love Story for Bobby Long (a.k.a., “Bobby Way-Too-Long”).
This is only the tip of the iceberg. There are probably dozens more. Submissions, please.