Brad Bird‘s Ratatouille (Disney/Pixar, 6.29) is, in all ways but one, a sublime experience. Call it a gifted-underdog-fights- the-odds fable (it’s about a French rat named Remy who manages to become the most admired chef in Paris) and a very entertaining souffle by way of inspired writing, delightful wit, great voice-acting and eyeball-popping digital animation. It’s not a great film, but it satisfies and then some. 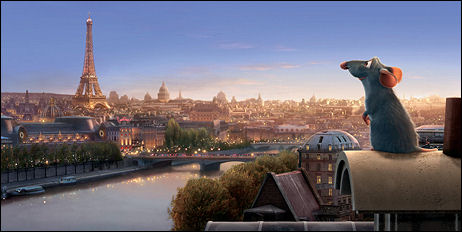 The visuals are so good and dazzling that Ratatouille delivers a perpetual throb sensation within your moviegoing heart. See it for any reason that comes to mind — the reviews alone have been highly persuasive — but absolutely don’t miss the drop-dead sumptuousness of each and every shot, cut, backdrop and camera move. Hats off to Pixar supervising animator Mark Walsh, character designer Luis Grane, character developer Andrew Gordon and all the grunt-level animators who did what they were told.
A story about fate, struggle, luck and love, Ratatouille is another brisk and bouncy animated heart comedy with another egalitarian theme — “anybody can cook.” What makes it special for an animated wing-ding is that it has the world-view of a 55 year-old gourmand with a seasoning of old-soul wisdom. The wise and brilliant writing is by Bird, Jim Capobianco, Emily Cook, Kathy Greenberg and Jan Pinkava.
Ratatouiille is such a scrumptious foodie ride that I was thinking halfway through that it’s going to make things a little bit tougher for Scott Hicks‘ No Reservations (a remake of the beloved Mostly Martha) which costars Catherine Zeta Jones and Aaron Eckhart and comes out on 7.27.
Like most commercial-minded animated features, Ratatouille has the frisky, frizzy energy of a gifted 12 year-old and one of those “ohh, man, we are looking to entertain the shit of you!” attitudes. And we all know you can’t get away from that kind of presentation if you’re looking to deliver mass-market orgasms and stay rich while doing so. 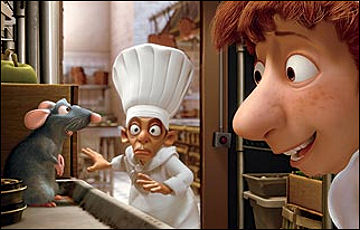 I went in expecting a thermonuclear blowout and I came out…uhm, definitely pleased. Not floating on helium, but happy. I’m not sure if it’s the best Brad Bird flick ever made (I’m extremely partial to The Incredibles) but it is not, as a certain bigmouth has proclaimed, “the best American film of 2007 to date.” So far it’s a three-way tie for that title — Zodiac, No Country for Old Men and that early-fall drama I saw four days ago that I still can’t blab about. Ratatouille is a close fourth behind these three. It is obviously a contender for the Best Animated Feature Oscar, but then you knew that.
My reservation is this: I wish Bird and John Lasseter and the Pixar guys had summoned the balls to throw out the expected commercial family-flick shtick and made a deeper, more complex and more “adult” film — something less anxious to please, a little braver and riskier by being a touch more complex.
I realize that laser-sharp digital animation and whirylbird camerawork from guys determined to live flush lifestyles means that the story has to follows certain formulaic guidelines, but somebody has to break the mold some day, and that will mean not automatically siphoning the material through the rubber hose of an “animated kids movie.”