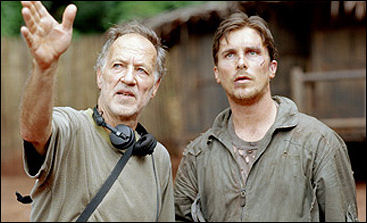 “The movie portrays nearly all of Christian Bale‘s Laotian captors and their North Vietnamese allies as subhuman, barely-civilized sadists who live to inflict torture and physical abuse. The paranoia and gaunt frames of the Americans (Bale, Steve Zahn, Jeremy Davies) attest to their brutal treatment, which is no doubt based on reality. Nevertheless, sitting through Rescue Dawn is like watching a war movie made by the Ku Klux Klan.
“Not that I’m surprised by this approach, because the history of movies about the Vietnam War is mostly a history of forgetting: forgetting that the Vietnamese were fighting a war of national liberation; forgetting they were real people; forgetting they had a rich, thousand-year old civilization and had been struggling to overthrow their colonial masters — first the French, then the Americans — for decades.
“For the most part, Vietnam War movies are all about us — the Stars and Stripes — and the ways the war messed with our heads. Thanks to our immersion into the heart of Southeast Asian darkness, we learned the Nature of True Evil, which compelled and even required us to kill everything that moved.
“Rescue Dawn revels in dehumanization. And it doesn’t just demonize the locals; it conveniently leaves out some essential historical context. For starters, Laos was a neutral country being used by various powers as a proxy in a secret war, a sideshow to the bigger conflict in Vietnam proper. U.S. forces flew an estimated 600,000 secret bombing raids into the country between 1964 and 1973.
“The idea that the Laotians are just a teeny bit pissed at our boy Dieter and his counterparts is [therefore] understandable: They’ve been napalming their fields, slowly starving them to death. I’m not defending their treatment of the prisoners, but the film tends to shuck off this information as if it didn’t exist. The slow-motion bombing montage that opens the film stands apart from the narrative that follows; Herzog never connects the desperate situation of the locals — more than 350,000 of whom perished during the bombing campaign — with the depraved acts of their captives.
“Last year Letters From Iwo Jima set out to humanize the Japanese soldiers who fought during World War II, doing so with compassion and realism. Yet 30 years after the end of the Vietnam War, our enemies, whose crimes pale in comparison to the Rape of Nanking and other atrocities committed by the Japanese, are still portrayed as savages of the first order.
“Is there some kind of half-century moratorium before you can acknowledge your opponents as human beings? Even Sen. John McCain, a POW who famously endured six years of imprisonment and torture, has returned to Vietnam and reconciled with his former enemies. Of course, ‘German’ movies were coming out barely a decade after World War II (see Marlon Brando as a sensitive Nazi in 1958’s The Young Lions), but let’s not even go there — that’s an entire graduate course on racial politics.
Rescue Dawn “is a well-made, compelling film, but I have yet to read a review that mentions anything about its racial and historical context. Are critics just giving its world-class director a pass? Maybe they’ve been so caught up in the story, they’ve forgotten to explore its context? Perhaps they simply accept these crazed Asian stereotypes as givens and don’t even notice them anymore (I’d love to hear what some Asian-film aficionados think of this picture)?”