Two weeks before its 6.29 nationwide opening, Michael Moore‘s Sicko is grappling with a serious piracy problem, especially now with sites like Gawker and journalists like Ad Age‘s Claude Brodesser-Akner writing openly that illegal downloads on a certain peer-to-peer content site are now happening left and right. 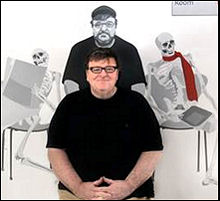 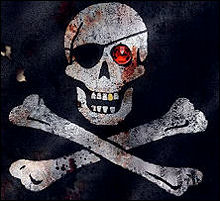 At what point do you admit to mass piracy?

I wasn’t going to say anything and hope for the best as far as Sicko‘s distributor, The Weinstein Co., is concerned, but the Gawker and Ad Age postings have let the cat out of the bag and now it’s running all over the room and knocking over furniture. What am I supposed to do? Pretend this isn’t happening?
This morning I called Sarah Rothman, a spokesperson for The Weinstein Co. She got back to me a few hours later with this statement:
“Health care impacts everybody right in their homes and it is not surprising that people are eager to see Sicko and become part of a larger movement. While virtually every movie released these days faces a similar situation, Sicko is more than just a movie, it is a call to action.” Wait…what does that have to do with digital piracy?
Rothman also said that the Weinstein Co. is “responding aggressively to protect our film but from our research it is clear that people interested in the movement are excited to go to the theater so they can be part of the experience and fight to reform health care.”
I’ve been told that the Weinstein Co. has hired firms that specialize in combating piracy and that it’s “taking a very aggressive approach to protecting the film.”
But can the Weinstein Co. or its security agents do anything substantively to block the illegal downloads (I don’t know how many people have seen Sicko online, but a guy just wrote me saying he just saw it this way), or are they pretty much limited to flapping their wings in the water?
Just to see what would happen, I downloaded Sicko this morning and it’s not a problem at all. I didn’t watch any more than four or five minutes’ worth, but this seems like a catastrophic situation all around for Moore and Harvey Weinstein and their phone-call-averse spokespersons. I went to Moore’s site and he, too, is avoiding any mention or discussion of the problem.
Maybe only a few thousand people are watching the film via pirate sites and it won’t impact the box-office in any significant way….maybe. But a voice is telling me I’m kidding myself. Am I? Reactions, please.