Here’s a trailer for what seems like an above-average thriller called Vantage Point, from director Pete Travis (who comes from TV), about an attempted assassination of a U.S. president (William Hurt) that’s told from five different points of view. 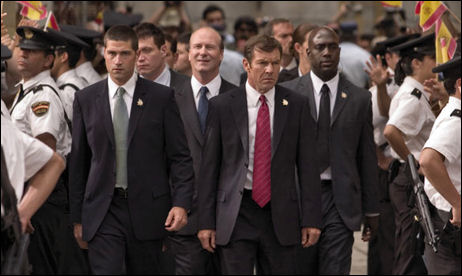 Forest Whitaker, Matthew Fox, Dennis Quaid and Sigourney Weaver costar. Probably just another jolt movie, most likely. It won’t open until 2.15.08 — eight months from now. The only uh-oh factor is that it’s a Sony Pictures release, and you know the dark-side karma those guys bring to everything they do and every movie they touch. (Except for the fluke of their funding and releasing Mike Binder‘s Reign O’er Me.)