A Pathe Pictures sales rep for Francis Coppola‘s Youth Without Youth asked me this morning to take down that negative assessment of the film that was received from a trusted buyer yesterday and posted soon after. The Pathe guy said he was horrified and that airing this view would be damaging, etc. I told him I was torn between feeling that it was fair to post the comment and at the same time feeling a little bit badly about it. But I finally decided to pull it and wait for reactions from some fair-game screening down the road.
I told the rep that I thought the posted comments sounded too rough, as I said in the item, but also that Youth Without Youth is going to have to face the music sooner or later. Coppola has been keeping it under wraps for months and months, and saying all along that it’s a student film, an experimental film, a personal artsy film, etc. Everyone knows that these are code phrases that mean “not that commercial.” I also said I’m in business with distributors all over (I depend on advertising support) and that I don’t want to be an asshole about this. But given my knowing and trusting the source, I explained again that it seemed fair to air the opinion, especially for a film that was shot in Romania and Bulgaria in late ’05 and early ’06, and has been shuffling and re-shuffling the deck ever since.
I said I suspected that Youth Without Youth might be in trouble when it was announced last May that it would have its world premiere at the RomeFilmFest, which is not a serious film festival, is renowned for being a softball venue, and so far has not been frequented by top-level critics (trade and otherwise) or buyers. I expected way back that it would go to Venice or Toronto first. It may go to Telluride (a prestigious but unofficial venue) but I guess we’ll find out soon enough.
In the end I decided I don’t want to cause pain just for the sake of causing pain or asserting stubbornness. I’d like to see Francis Coppola back in the game and plugging away for the next two or three decades, and I don’t want to preemptively interfere with that scenario. And yet I’ve been asking myself if I’m being a pushover. Is anything on HE ripe for removal providing the person requesting such is sufficiently horrified and believes that the item/story will be damaging enough?

“I’m not suggesting that AICN is in the pocket of the studios. Critics hang out with filmmakers all the time, and get schmoozed at junkets. Recently in a series of blogs, the Guardian tackled [this] issue. But fanboys want to be in the movies they adore and hang out with their heroes. [And these days] AICN’s Harry, Quint, Capone, et. al. now seem to be doing this and as a result, this flawed but thrilling site has become smug and pedestrian.
“So here’s my message to Harry: 11 years on the web is about as long as it gets. It’s time to change, either back to something simpler, or something different. I still get stupidly excited to hear that Billy Crudup might be cast as Dr. Manhattan. I want to hear about an early draft script of the Dark Knight. But every time I read that J.J. Abrams wrote you a nice email, I think that you’re not one of us any more — you’re one of them.” — The Guardian‘s Adam Rutherford ripping into Ain’t It Cool News.

A trailer for Robert Benton‘s Feast of Love (MGM, 9.14), a seemingly upmarket relationship comedy base on William Shakespeare‘s A Midsummer Night’s Dream, with Gregg Kinnear playing the hapless middle-class guy whose significant other (Selma Blair) leaves him for another woman, and then the girlfriend he hooks up with later on (Radha Mitchell) fools around with another guy. With Morgan Freman, Billy Burke, Alexa Davalos, Toby Hemingway and Jane Alexander. 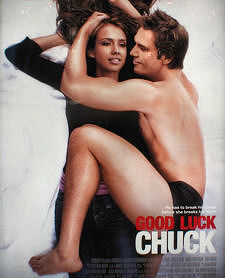 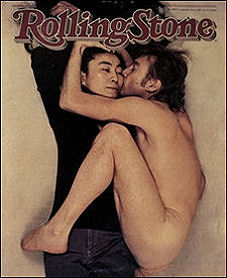 It’s not a rumor: Superbad is a bolt out of the blue — the funniest, most cleverly written youth comedy in I-don’t-know- how-many-years. It’s going to be a huge money machine when it opens on 8.17. Produced by Judd Apatow and co-written by Seth Rogen and Evan Goldberg, it’s a better teen-sex film — funnier, wilder, more truthful even– than The 40 Year-Old Virgin or Knocked Up are in their respective realms. 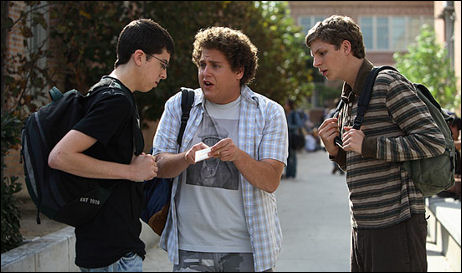 It also marks the return of director Greg Mottola, who’s been working steadily on television but languishing in movie jail since the success d’estime of The Daytrippers eleven years ago.
Superbad also heralds the arrival of the funniest comic trio since the post-Duck Soup Marx Brothers — Jonah Hill (the sociopathic big-mouthed fat guy), Michael Cera (the bright, quiet, thoughtful guy) and Christopher Mintz-Plasse (the dweeby, pale-faced nerd). I’m serious — these guys are the total dynamo right now. You should have heard the crowd laughing last night at the Arclight. The oil was blowing out of the ground and splattering everyone in sight.
If I were reading this and not writing it, I’d wonder fight away if it’s on the level of Risky Business, the Citizen Kane/Ben-Hur of teen-sex comedies. The answer is that it sometimes exceeds Risky Business by way of witty dialogue, rich characters and inventive comedy, but it fucks up somewhat by giving a lot of screen time to a couple of self-destructive, moron-level doofus cops (played by Rogen and Bill Hader) who aren’t the least bit believable. The idea was to forget believability, in fact. The filmmakers said screw it, who cares?, let’s just make it funny, etc.
Imagine if Joe Pantoliano‘s character in Risky Business (i.e., Guido, the “killer pimp”) turned up dressed as Clarabelle the Clown and pissing out of his ear and honking a horn. Rogen and Hader are so beyond-the-pale that they take the movie off the rails two or three times, and it’s a shame..
If it hadn’t been for this mistake, Superbad would be a major contender right now for the distinction of being the funniest tits-and-zits comedy ever made. As it is, it’s a frequently funny, now and then genius-level farce that’s “not quite Ivy League.” But when it’s working, it’s over the moon.

Master screenwriter Guillermo Arriaga (Babel, The Three Burials of Melquiades Estrada, 21 Grams) will direct Charlize Theron in a parental-relationship drama called The Burning Plain, which will start shooting in November with funding provided by Marc Butan, Todd Wagner and Mark Cuban‘s 2929 Productions. I wonder, though, what the movie is really about and what the heavy element is. Arriaga doesn’t write stories about moderate people adopting sensible solutions to problems and then hugging each other at the end. He writes about ruptures, potholes, illicit sex, auto accidents, etc. 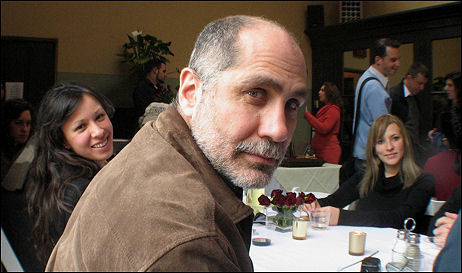 If you count the $12 million earned at Tuesday’s midnight shows, Harry Potter and the Order of the Pheonix now has $44 million in the bank. It earned $32 million yesterday, taking in $10,555 per screen in 4200 situations. Anyone who sits through this very dull film and goes “wow…if only more films could me like this one!” is suffering from a lack of cinematic experience. If you go to it and shrug and say “okay, not bad…I had to go because I love the books,” etc., then fine. But you can’t be over the moon about the film itself. Well, you can…but you have to shut up about it.
The new tracking shows Hairspray is 88 gernal awarness, 31 definite interest with 12% definitely not interested and 5% first choice…decent, not tremendous. I Now Pronounce You Chuck and Larry is at 73, 39 and 7. I Know Who Killed Me, the Lindsay Lohan thriller, is at 28, 13 and nothing. No Reservations (opening 7.27) is at 44, 21 and 1….dead. The Simpsons movie is looking pretty good — 80, 41 and 8. Ditto The Bourne Ultimatum (opening 8.3) at 64, 47 and 6.

“When Manhattan opened in April 1979, Andrew Sarris began his Village Voice review as though granted a vision: Manhattan had ‘materialized out of the void as the one truly great American film of the ’70s,'” recalls Village Voice critic Jim Hoberman in a 7.10 nod to Woody Allen‘s 1979 classic playing at the Film Forum from 7.13 to 7.19. 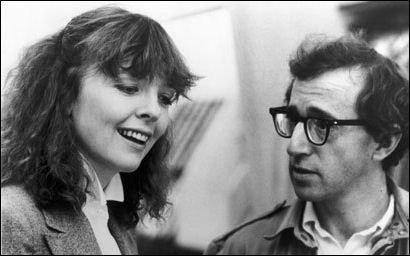 “Leaving aside the decade’s avant-garde and documentary productions, this is still a remarkable claim to make of a massively mythologized period. Where was the void? Why did Sarris love Manhattan so? For the first time, Allen’s visual rhetoric was equal to his writing. For the first (and also the last) time, he graced the screen with a fully realized vision. And then, of course, there was the shock of recognition: Manhattan‘s world was a glamorized version of Sarris’s.”
I was living on Sullivan Street and barely eeking out a living as a freelance film writer when Manhattan came out. I knew relatively few people in the film-journalist world, the ones I knew regarded me askance, I was working at restaurants to make ends meet and enjoying damn little comfort. And one of the reasons I loved every minute of Manhattan is that it provided a great fantasy trip into the kind of New York world I wanted to know and live in, but couldn’t afford.
Of course it was a smart Woody Allen uptown dream movie. Of course it bore little relation to the city I was confined to, or to the one that I imagined most New Yorkers knew. I wished time and again that year that I could live in a world that was at least akin to Manhattan‘s — cultured, clever, moneyed and buffed by Gordon Willis in black and white and a 2.35 to 1aspect ratio. The fakery was what everyone found so delightful about the film. Because it was very sharp and sophisticated and nicely burnished.

The L.A. Times reported yesterday that Kerwin Matthews, the good-looking star of The Seventh Voyage of Sinbad and Jack the Giant Killer (and a supporting actor in The Devil at 4 O’Clock and Man on a String, among many other films), passed away “either Wednesday night or Thursday morning” at age 81. 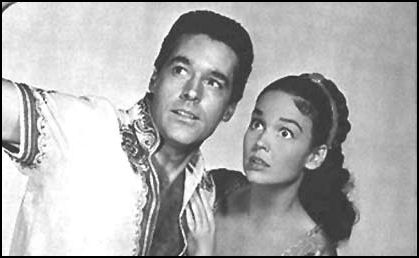 What the Times meant to say is that Matthews died about a week ago. Matthews’ partner Tom Nicoll apparently didn’t get around to telling anyone for a few days. Brian’s Drive-in Theatre reported earlier than Matthews died on July 5th. 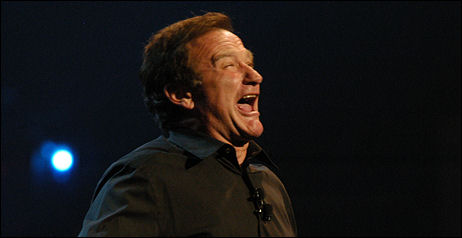