In this 9.29 L.A. Times essay, critic Kenneth Turan seems to be writing about Once from a slightly different angle — i.e., how come it took so long for this exquisite little film to get picked up? — than the one I went with yesterday, which was basically “how come more Average Joes haven’t paid to see it?” But he gets around to saying the exact same thing at the conclusion.

“The Once experience worried me,” Turan writes, “because it underlined how much the risk-averse studio mindset of being indifferent to quality, of caring more about what can be sold than what will be cherished, is infecting an arena that has always prided itself on being impervious to those ways of thinking.
“Yet to be fair, it would be wrong to completely blame the specialty distributors for their lack of brio where acquiring Once was concerned. If they are timid, if they lack trust in the willingness of an audience to find and support something that lacks marketable elements, it’s because experience has shown them that they have reason to be afraid.
“Even now, in the face of the success and visibility of Once, I am constantly running into supporters of independent cinema who have not gone to see the film partly because, despite a terrific Fox Searchlight campaign, it lacks the kind of easy-to-remember hook having Keri Russell in a cute uniform has given Waitress.” 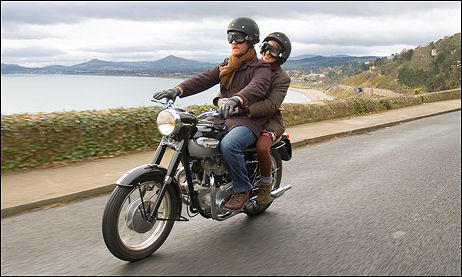 Turan’s kicker graph is well phrased, but it’s a stern lecture from a man who’s losing his patience with those who say theyr’e into offbeat cuisine but in fact are dilletantes looking for comfort food: “If you want distributors to acquire films as sophisticated and unusual as Once, ” Turan admonishes, “you must make the extra effort to seek them out and patronize them. If you don’t, don’t count on them to be around when you need them the most.”
The irony is that Once is about as comfort food-y as anyone could ask for. It just happens to be very Irish and low-budgety and lacking in big stars.

“After watching Evan Almighty, I noticed that the exiting audience — pale, wan and harrowed — were collectively singing the post-movie equivalent of the lamentations of Jeremiah, emitting cries not unlike those of the sorely tested Job or the benighted citizens of plague-fatigued Egypt, and generally cursing His Holy Name with every obscenity in the biblical lexicon.
“All the Big Questions popped rapidly into my mind: ‘Why does God inflict Bad Movies on Good People?’ and more pertinently, ‘How can we know for certain that God is good if he permitted this piece of dung to reach our screens?’
“Certainly Evan Almighty (‘a laugh-drought of biblical proportions,’ one critic called it) performed a breathtaking miracle by making Steve Carell unfunny, but the film should have believers and nonbelievers alike down on their knees praying for funnier comedies.” — thus sayeth (or said-ith) The Guardian‘s John Patterson.

Edward Norton participated in a Hulk dog-and-pony show in front of 6500 Comic-Conners yesterday along with costar Liv Tyler, Hulk director Louis Leterrier, and producers Avi Arad and Gale Anne Hurd. It had to have felt a little forced. Norton simply isn’t part of the tribe — doesn’t talk geek, look geek….the genes and the attendant belief systems simply weren’t passed along by his parents — and no amount of good-sport promo whoring can change that fact. (Original reporting by MTV.com’s Larry Carroll.) 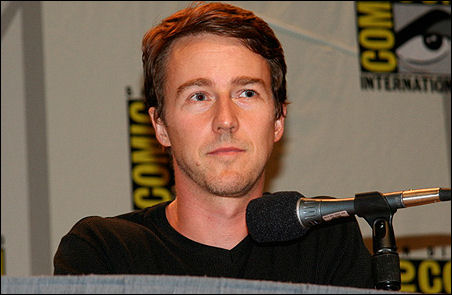 “And heah, out of the oven…the chicken and the peahs….very nice…sort of a French thing….a little pepper on the top….400 degrees…one hour….these peahs are very nice, very tasty…they’ve gotten kinda candied …pehrfect with the chicken…they go very well togetheah.” — Christopher Walken cooking what looks like a delicious upright chicken along with six or eight sweetened pears. Walken’s a serious foodie, but it’s hard to watch this video without wondering when the punchline’s coming, even though you realize there probably won’t be one. And you’d be right. 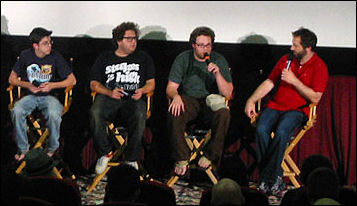 I watched the Bee Movie footage at the Cannes Film Festival, I listened to Jerry Seinfeld do a funny riff about it, and it all seemed fine. I said on the day of the Cannes thing that “I’m half into it…I like ‘silly’ if the movie really goes for it whole-hog.” But this one-sheet is just…what is it? It’s dull and smug like cereal-box art. It seems afraid to say or do anything that might define the movie in some specific attitudinal way, and thereby persuade some of us to actually sit up and take notice. 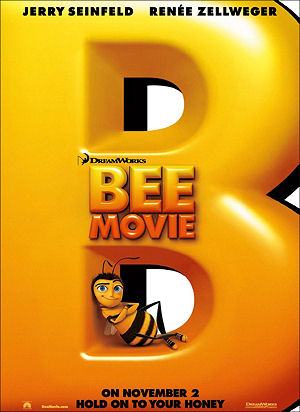 I recounted the Bee plot last May: “Barry B. Benson (Seinfeld) is a bee who’s not thrilled at the idea of doing just making honey for the rest of his life. A disillusioned insect who wants to be different…the same idea Woody Allen had in Antz.
“Barry gets to leave the hive on a honeysuckle mission in Manhattan’s Central Park, and he eventually runs into humans who try to swat him to death. Barry is saved by Vanessa (Renee Zellweger), a kind-hearted hottie, and he promptly falls in love. Kind of a King Kong-Ann Darrow romance in reverse.
“Then he decides to talk to her. English, that is. Then he learns about the human honey business, and decides that humans are ripping off the bees in order to do so, and so files a lawsuit to try and prevent this.”
Bee Movie comes out on 11.2. Chris Rock, Matthew Broderick, Oprah Winfrey, Sting and Ray Liotta (among many others) voice the other bees and humans who figure in the plot. 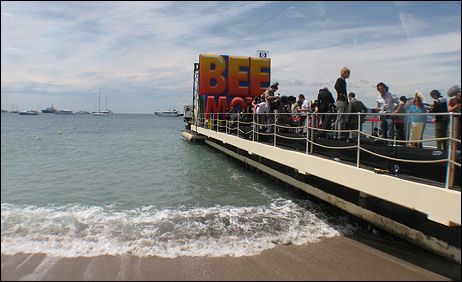 A hundred years hence, film historians will look back at the epic-quest CG fantasy fanboy-adventure genre (Arthurian comic-book fables, other-worldly milieus, mind-blowing visuals, Joseph Campbell-esque heroes in their 20s, constant insinuations and threats from all-powerful reptilian villians, relentless physical combat or sword-fight scenes, gah-gah finales) and be absolutely agog that tens of millions went to these films over and over again for decades (geek culture has sprayed shorts over these films since Star Wars opened 30 years ago) without making a peep about how oppressively similar they were from year to year, decade to decade.

The historians will conclude with mixtures of amazement and mystification that the fanboys wanted the same myth over and over, and that Hollywood kept obliging over and over, and that the cycle kept on ad infinitum. And nobody ever said “hey, what is this?” except for the occasional online iconoclast, and whenever one of these soreheads spoke up he/she would get trashed and shouted down and called stupid and irrelevant.
That said, the Angelina Jolie nudie-temptress footage in the Beowulf trailer is greatly appreciated.