The Envelope‘s Tom O’Neil wrote earlier today to ask for a quote about the Best Animated Feature race as it looks now. His piece just went up, but here’s my summation in my own words: Ratatouille is the front-runner but the matter of Beowulf‘s classification is far more interesting.

I’ve seen most of the 3D Beowulf product reel that played at Comic-Con, and the digital work has convinced me that it’s the most out-there and avant-garde-ish animated stuff I’ve seen in ages — far more so than Richard Linklater‘s Waking Life or A Scanner Darkly, and way in front of Robert Zemeckis‘s Polar Express.
Here’s how I wrote it…
“By far the best animated film of the year so far is Ratatouille — forget the Simpsons, forget Shrek the Third, and, given the indications so far, it’s hard to think of Jerry Seinfeld‘s Bee Movie as any kind of serious Ratatouille competitor. Look at the new one-sheet, listen to Seinfeld discussing it in Cannes….draw your own conclusions.
“Ratatouille rules because it says something that is true and generous that everyone recognizes as true (or wishes were true), which is that not anyone can be an artist but that art can come from anywhere. To an Academy person, this could be taken to mean that an electrician or a makeup artist or a bit player can write a screenplay or direct a film that everyone will love or which might even win awards. That is music to the Academy’s Unwashed Masses, and this is why Ratatouille has, at this stage, the clear lead. Apart from the fact that it’s one of the best and brightest animated films ever. 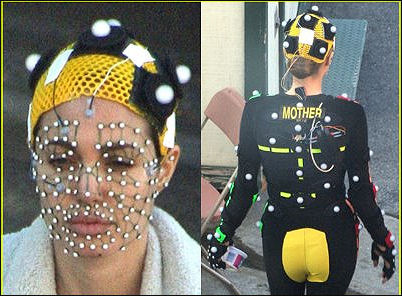 “But the most interesting animated film so far is Beowulf, which I saw a reel of footage from yesterday. Projected in 3D, it looked to me like the trippiest and most absorbing animated footage I’ve seen in ages, although it may not, according to the Academy’s “Rule Seven,” be an animated film. ‘May’, I say.
“Beowulf is a real eye-popper and clearly something other than the realm of animation. Each and every frame is ‘animated’ by any standard of digital recomposition, and yet the Academy seems to be saying that any film that begins with live-action performance and then uses digital animation to enhance or augment that performance (like, say, Linklater’s two above-named films) is not eligible. Again — this is not the final word.
“The animation in Beowulf, which isn’t “animation” at all, is definitely painterly, and at the same time it’s obviously not unvarnished reality. And yet it began at the core as live-action footage of the actors (Ray Winstone, Anthony Hopkins, Angelia Jolie, etc.) shot in a room full of sensors that captures their performance in a bare-bones, Samuel Beckett style at Culver Studios in early ’06.
“Rule Seven of the Academy rules regarding Best Animated Feature film say that a contender has to be “a motion picture of at least 70 minutes in running time, in which movement and characters’ performances are created using a frame-by-frame technique. In addition, a significant number of the major characters must be animated, and animation must figure in no less than 75 percent of the pictures running time.”

Beowulf screenwriter Roger Avary is calling the 3-D Beowulf “digitally-enhanced live action”. It’s also, in my view and without question, animation. It’s also mind-blowing. I loved it. I can’t wait to see the whole feature.
Beowulf, says Avary, is “enhanced live action” and as such is “closer to Ralph Bakshi‘s painting over cells, the rotoscoping of 2-D imagery, even though Beowulf is about the rotoscoping of 3-D imagery. The 3-D version will be the largest 3-D release of all time. It will be released also in Real-D, a new 3D process, and IMAX 3-D.
“More and more, the differences between animated and real-life action is starting to blur. The form is changing, and rather than limit actors with this technology, Zemeckis is actually trying to figure out a way that can broaden what an actor can do.. He want to make sure it’s about performance…this is the first time that the technology doesn’t get in the way…it’s technology allowing you to fall deeper in the performance.”