Missing in Michael Fleming‘s Variety story about Town House, a film that Once director John Carney will begin shooting in January for Fox 2000, is that it’s fundamentally about a character grappling with agorahobia, i.e., a fear of open spaces. 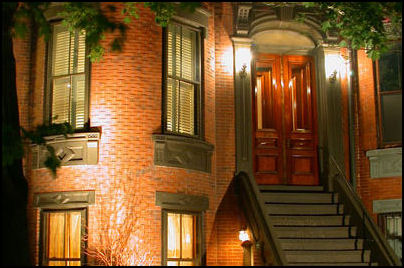 Doug Wright‘s script is an adaptation of Tish Coen‘s recently released book. Coehn’s story unfolds in Boston; Fleming reported that the film “will shoot on the East Coast.” Does that mean New London? Asbury Park? Does Carney have a problem with Beantown, or was Fleming just writing the story under a hard deadline?
Here’s an Amazon/Booklist summary: “The son of a legendary rock musician, Jack Madigan (an Irishman!) has been living off his father’s royalties for years, but things are looking dire as the money runs out. His wife has already left, unable to deal with Jack’s refusal to confront his agoraphobia; his teenage son, who avidly embraces 1970s clothing because ‘uncool is the new cool,” may relocate to California with his mom..
“But Jack’s once magnificent Boston townhouse, now crumbling around him, is being repossessed by the bank. Even his work as a color consultant — he has been tinkering for years with a formula for the perfect white–is failing to provide the funds he so desperately needs. His only hope is the charming but hopelessly inept realtor assigned to sell the house. With the help of the little girl next door, whose dream is to become an Olympic skater, Jack suddenly finds himself motivated to face his greatest fear — stepping outside of his house.
“Rising above its obvious, overly tidy plotting, this highly readable first novel offers plenty of sardonic humor and a cast of endearing eccentrics.”