I took another stab last night at reading Aaron Sorkin‘s script of Charlie Wilson’s War, and now, on page 32, I’m finally feeling the heat of it. (I don’t know why I couldn’t get into it before.) I’m particularly revved about what Philip Seymour Hoffman will do with the part of Gust Avrakotos, a Middle Eastern intelligence operator. The script is a pleasure to read, but Hoffman’s part is delicious. It’s like ice cream. 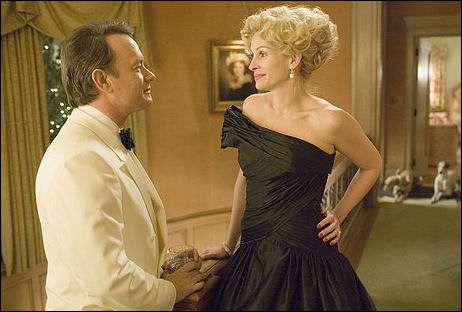 Charlie Wilson’s War is the true story of how a play-it-as-it-lays, cruise-along Texas Congressman (Tom Hanks), Hoffman’s CIA agent and a rich Houston socialite named Joanne Herring (Julia Roberts) joined forces to lead “the largest and most successful covert operation in history,” according to one synopsis.
The efforts of these three, it says, “contributed to the fall of the Soviet Union and the end of the Cold War, with consequences that reverberate throughout the world today.”
I finally saw Charlie Ferguson‘s No End In Sight last night, a brilliant but devastating doc about the Bush administration’s disgusting mismanagement of the situation in Iraq following the March 2003 invasion. The pain and rage we’ve caused over there is incalculable. I came out of this film seething with anger at the Bushies. It made me want to see them strung up. And now along comes this big-studio upper about Americans — three likable renegades — doing the right thing and making it up as they go along and changing history.
Charlie Wilson’s War is based on truth, but it reads like a feel-good ’80s nostalgia ride for people who want to remember a time when Americans were effective in that area and even liked, as opposed to how things are today in Iraq and Afghanistan.
The MIke Nichols film is about Charlie, Gust and Joanne travelling the world (Joanne not as much — Roberts’ role is smaller than Hoffman’s and much smaler than Hanks’) and forming unlikely alliances among Pakistanis, Israelis, Egyptians, arms dealers and lawmakers. “Their success was remarkable,” it says here. “Funding for covert operations against the Soviets went from $5 million to $1 billion annually. The Red Army retreated out of Afghanistan.
“When asked how a group of peasants was able to deliver such a decisive blow to the army of a superpower, Pakistani President Mohammad Zia ul-Haq responded simply, ‘Charlie did it.'”