I Now Pronounce You Chuck and Larry (Universal, 7.20) is the ultimate yaw-haw straight guy comedy about gays. That’s a way of saying it’s a chowderhead thing (i.e., made for chunky guys who slurp down pitchers of beer at sports bars and wear low-thread-count T-shirts) that’s not very hip. That’ll be no problem at all for 85% or 90% of the viewing public, but what will take it down with the somewhat more thoughtful 10% or 15% is that it’s a creative house divided. 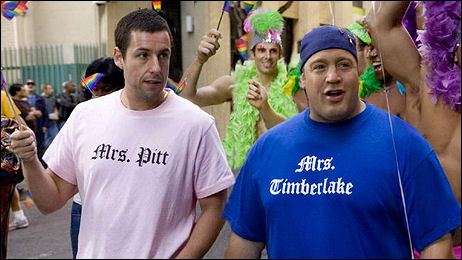 The Chuck and Larry dialogue says all the right humanistic things — i.e., that everyone but especially red-blooded heteros need to show respect and support for gays — but a good percentage of the jokes are of the rib-poking “eewwww!” variety about what gay guys say and how they behave and decorate their homes, and what they do with each other in private. Jokes, in short, that say gays are different and prissy and into icky sexual practices facilitated by substances in tubes.
This is a flagrantly hetero film. The women characters are almost all hot-to-trot sex bunnies who are totally devoted to servicing Adam Sandler’s “Chuck,” a Brooklyn fireman-slash-sexual conquistador. Let’s get one thing straight — fireman got laid like rock stars in the weeks following the 9.11 tragedy, but otherwise the unattached ones live hit-and-miss sex lives like anyone else. Sandler’s Chuck isn’t just an exception — he’s Warren Beatty‘s Shampoo character without the guilt, and then taken to almost Daffy Duck-level extremes.
The first time we meet Chuck he’s coping with a hot-and-saucy girlfriend who’s enraged because he’s schtupped her sister behind her back. Chuck claims he couldn’t tell the difference in the dark. Then the sisters devolve into a rivalry about which one is hotter, i.e., more pissed at each other than they are at him. I was like…what?
Ten or twelve minutes later Chuck is recuperating in a hospital room from a fire-fighting accident, and talking to an attractive doctor like she’s a pole dancer….c’mere baby, sit on my lap, etc. She’s enraged at his crude disrespect and walks out the door. Five minutes later she’s not only schtupping Chuck in his Brooklyn apartment, but taking part in a group scene with three or four other girls. Again…what? How is depicting Sandler’s sexual prowess in absurdly overwrought terms “funny”? 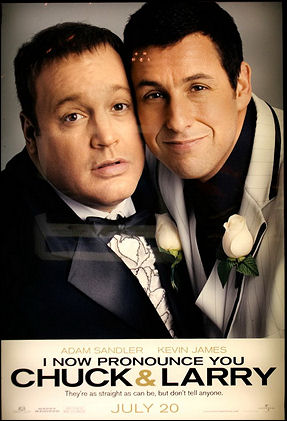 Chuck and Larry is about a scam in which Chuck and Kevin James’ “Larry”, old pals who work as firefighters out of the same station, pretend to be gay so James, a widower with kids, can receive insured benefits. Sandler and James have to lie and lie and lie all through it, but they finally come clean at the end. In this sense the film adheres to a classic formula know as the Three D’s — desire, deception, discovery. Some like It Hot used this exact same formula, but my God, what a difference in the execution!
The basic problem is that there’s no interest on Dugan or Sandler’s part in a story that even occasionally passes muster as something that could conceivably happen, or in characters you can half-accept as occupying the actual world outside. The action and dialogue are all about dumb schtick. Sander and Dugan are saying to the audience, “You don’t believe this stuff and neither do we….obviously. But you know what? You don’t give a shit because we’re being funny, right? That’s all that really matters.”
As it turned out, I Now Pronounce You Chuck and Larry didn’t make me laugh once…not once. (To be fair, others in the Mann Chinese 6 audience were lapping it up. Even Jett was laughing.) It’s going to make decent money this weekend, somewhere in the mid 20s.
What I was looking for, I guess, was something that was really and truly outrageous, something that would make you go “oh my God, I can’t believe I just laughed at that.” Then it hit me — the film has to take its closeted attitudes (gay guys are cool but also a little bit ewww!) and turn them around. 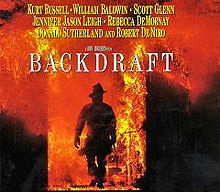 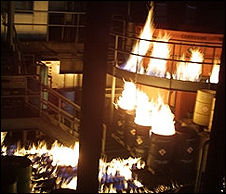 There’s no question that the film’s strongest single impression (for straight guys, at least) is when Chuck takes a long look at Jessica Biel‘s near-naked ass. (Director Dennis Dugan milks the moment with two extended close-ups.) It suddenly hit me that this magnificent object d’art could have been deployed to a truly subversive and stand-out bit along the lines of that scene in Brokeback Mountain when Heath Ledger flips over Michelle Williams in their marital bed, etc. I trust I don’t have to explain myself any further, but think about this — the ewww! factor would suddenly be addressed in a different light, and an especially different light if Biel’s character turned out to be…well, if not “receptive” then at least open to the action.
The always-likable Sandler is appealing enough but James is the better performer — steadier, more planted, less smirky. The film also makes it clear that Biel doesn’t have much acting ability. She’s been told to exude a cheerful, go-along attitude with everything that Sander, James and the plot throw at her, but there’s nothing extra going on.
I knew I Now Pronounce You Chuck and Larry would be a problem early on when James and Sandler and their buddies get on their firetruck and arrive at a burning building, and the flames coming out of the windows look exactly like the flames on the Universal Theme Park “Backdraft” attraction. This is a typical Dugan move — he doesn’t care if hundreds of thousands of people have seen those boring, gas-generated fires, or made jokes about them after seeing them in Ron Howard‘s Backdraft. Ten year-old kids in Kabul know real infernos don’t look like this, and Dugan waves it off. This is the blade of grass that tells you what kind of film Chuck and Larry is. 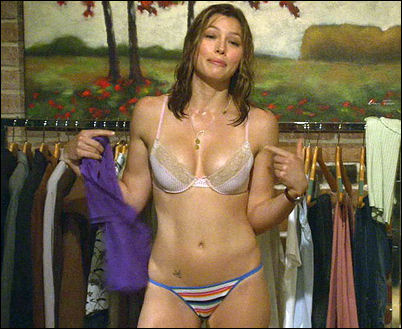