Paul Haggis‘s In The Valley of Elah (Warner Independent, 9.14) turns on an act of savage murder by a group of soldiers recently returned from the Iraq War, and the efforts of the father of a victim of this act (Tommy Lee Jones) to find out what the hell happened. In the view of N.Y. Times reporter Michael Cieply, Elah will be asking moviegoers “to decide if the killing is emblematic of a war gone bad.” 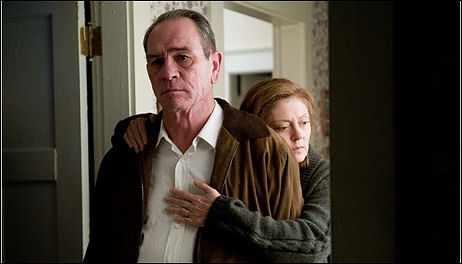 Tommy Lee Jones, Susan Sarandon in Paul Haggis‘s In The Valley of Elah

In a broader context, Cieply observes, this anti-war viewpoint puts Elah in the vanguard “of a new and perhaps risky willingness in the entertainment business to push even the touchiest debates about post-9/11 security, Iraq and the troops’ status from the confines of documentaries into the realm of mainstream political drama.”
Ciepley’s piece (titled “While Real Bullets Fly, Movies Bring War Home”), which appears on the front page of today’s Times and not the Arts section, reviews various upcoming Hollywood films that “use the damaged Iraq veteran to raise questions about a continuing war.”
In this light as well as own one of general “immediacy” he mentions Kimberly Pierce‘s Stop-Loss, Paul Greengrass‘s currently-preparing Imperial Life in the Emerald City, Brian De Palma‘s Redacted, James C. Strouse‘s Grace is Gone and Gavin Hood‘s Rendition.
Cieply doesn’t mention Kathryn Bigelow‘s The Hurt Locker, a film about an elite bomb squad unit in Iraq that’s either rolling right now or fiarly close to that status. And he doesn’t mention the Americans-in-Afghanistan films — Robert Redford‘s Lions for Lambs, Mike Nichols‘ Charlie Wilson’s War, and Oliver Stone‘s planned movie of Jawbreaker. Or Peter Berg’s The Kingdom (FBI guys in Riyahd). Or Marc Forster‘s The Kite Runner, which is set in Kabul, spoken largely in Farsi, and, as far as I’ve been able to tell, doesn’t reflect upon political or cultural conflicts caused by or involving Americans at all…but then I haven’t read the book. 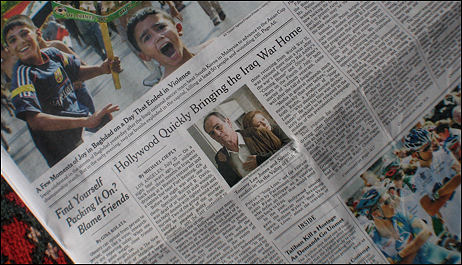 But “among the new films, Valley of Elah is sure to be one of the most closely examined,” Cieply says, “thanks to Mr. Haggis’s credentials — he shared an Oscar for writing Million Dollar Baby and was nominated for another as co-writer of Letters From Iwo Jima — and because of his opposition to United States policy in Iraq.”