I finally got into Clap Your Hands Say Yeah early this summer, primarily due to my son Jett buying their ’05 debut album at a music store in Rome and playing it to death, and then doing the same with their second album, Some Loud Thunder, when we got back to L.A. 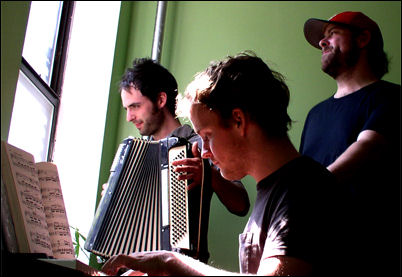 I’m not exactly in love with these guys but their stuff grows on you. The lead singer’s voice is kind of David Byrne-y, but with a whiney, spazzy, cracked-voice quality that’s very much its own thing. I don’t know music all that well, but various rock crickets seem to agree they’re a cool (i.e., increasingly popular, in a good grove) band.
Now their hip rating has been thrown into question. N.Y. Daily News gossip columnists George Rush and Joanna Molloy reported today that “Tom Hanks got some support — in more ways than one — from Clap Your Hands Say Yeah on the L.A. set of The Great Buck Howard. The hot indie band appears in the flick and has written a batch of songs for its soundtrack. The film stars Tom, son Colin Hanks and John Malkovich. ”
Produced by Hanks’ Playtone and co-produced by Philip Anschutz‘s Walden Media, The Great Buck Howard is a father-son relationship movie. The fact that Playtone mainly produces middlebrow, family-friendly stuff (ditto Walden Media) indicates where this film is coming from. The IMDB plot: “As the career of renowned illusionist (Malkovich) continues its decline, a young man (Colin Hanks) fresh out of school becomes his new assistant. But his father (Hanks) is not enthused about his son’s career choice at all.” In short, a non-Bronx version of A Bronx Tale with magic substituted for mob values.
It’s generally not cool for an edgy GenX rock band to compose music for a family-friendly, vaguely square-sounding PG or PG-13 movie, especially one that’s being partially funded by a social conservative like Anschutz. In one fell swoop Clap Your Hands Say Yeah has gone from “wow, really exceptional, catching on bigtime” to “what the fuck where they thinking?” and “are these guys closet milquetoasts“?