U.S. authorities looked the other way when the Rwandan genocide happened in ’94, and there hasn’t been very much said or done about the current slaughter in Darfur either, despite George Clooney and Don Cheadle trying to ignite attention. (And men like Congressman Tom Lantos writing articles like this one in Vanity Fair.) Racist indifference about the fate of dark-skinned peoples is surely part of the reason, but did anyone in this country get wildly aroused by the Serbian slaughter of Bosnian Muslims in the ’90s, or by Pol Pot’s Cambodian genocide in the mid ’70s? 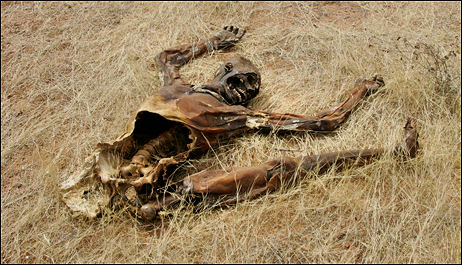 Part of the problem is that the reasons for the Darfur killings, which began in early ’03, are a bit murky. But it comes down to an ethnic cleansing campaign driven by oil-rich, Islamo-facist Arabs who want to destroy the farmer-class blacks who live in the Sudan’s southwestern section.
The bad guys are the Sudanese chiefs in Khartoum and the evil militia called the Janjaweed, whom the government funds. The good or somewhat better guys are the Darfur-region farmers, some of whom have given support to the fighters for the Sudan Liberation Movement and the Justice and Equality Movement. The Janjaweed and the Khartoum government have been systematically slaughtering tribes — women, children, old people, livestock — as a way of getting at the rebels. Maybe it’s also because Khartoum has acquired a taste for conquest and simply doesn’t want to stop. The estimates of the dead range from at least 200,000 to over 400,000.
I’m finally feeling the situation a bit because last weekend I saw Annie Sundberg and Ricki Stern‘s The Devil Came on Horseback (International Film Circuit), which opens in NYC on 7.25 and after that move across the country on a city-by-city basis into the mid-fall.
It’s a strong, moving, very well made documentary. Sad, obviously. Numbing, to a certain extent. (How could it not be?) But it’s not just grisly images and depressing statistics. It tells a story of an awakening, and in so doing invites us to follow suit. I’m glad I saw it. 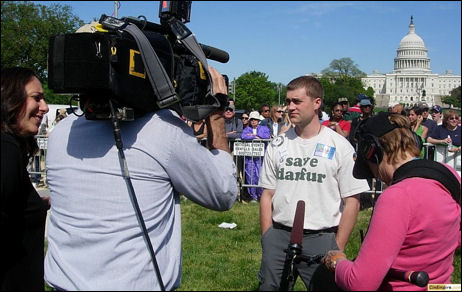 The first half of Horseback is the story of how former Marine Capt. Brian Steidle, a guy with a taste for danger, wound up taking pictures and video footage of the Darfur genocide after landing a job with the African Union, an observer group, in ’04. He came to realize soon enough that the Janjaweed militia, armed by the Sudanese jihadists, were slaughtering Darfur’s black, non-Arab residents in massive numbers.
The second half is about an outraged Steidle showing his stills and his video documentation to various political and do-gooder groups in the U.S.. As Variety‘s Robert Koehler has said, the fact that an ex-Marine “had to do the job that was once the province of foreign correspondents is both an unspoken statement on Darfur’s extreme danger and remoteness, and also on the failure of Western — and American — journalism, and in particular, TV journalism to report on Africa.”
The film finally wonders what will it take to get U.S voters aroused enough to ask that something be done to stop the murders. Things have happened, of course — rallies, celebrity lobbying, Senator Barack Obama calling attention to the situation in speeches, etc. But this is only the beginning.
What the U.S. government really needs to do is step in big-time and start forcing the issue. Huge financial incentives (i.e., bribes) need to be offered to make it clear to Sudanese president Omar Hassan al-Bashir and his cabinet stooges that stopping the slaughter will be much more profitable than to prolong it. The Chinese need to get tough with them also. An armed civilian-protection force has to some- how muscle its way into the country to defend the defenseless. 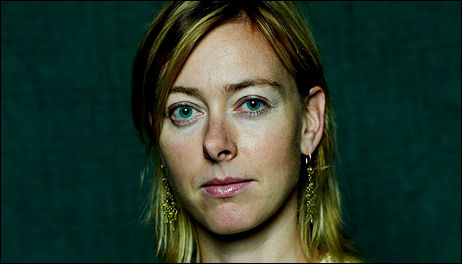 I’ll be doing a phoner with Steidle tomorrow; I’ll try and get it up before the day’s out.