Brutal, urgent, devastating — the documentary The Devil Came on Horseback demands to be seen as soon as possible and by as many viewers as possible,” N.Y. Times critic Manohla Dargis has written. “An up-close, acutely painful call to action, the movie pivots on a young American, a former Marine captain named Brian Steidle, who for six months beginning in the fall of 2004 worked for the African Union as an unarmed monitor in Darfur. 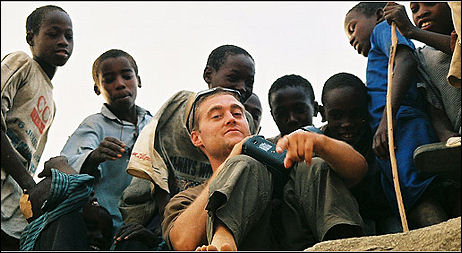 “What he saw in Darfur was unspeakable. And then he returned home, his arms, heart and head filled with the images of the dead.”
The most stirring portion is in the final two paragraphs:
“There’s really nothing more to say– and there’s everything else to say — but because I cannot improve on [N.Y. Times columnist Nicholas] Kristof‘s passionate words on Darfur, who wrote about Steidle in a March 2, 2005, column titled ‘The American Witness.’ I will repeat the final lines of his 2005 column about Mr. Steidle, which are worth repeating again and again until peace at last makes them irrelevant.
“But if our leaders are acquiescing in genocide, that’s because we citizens are passive, too. If American voters cared about Darfur’s genocide as much as about, say, the Michael Jackson trial, then our political system would respond,” he wrote. “As Martin Luther King Jr. put it: `Man’s inhumanity to man is not only perpetrated by the vitriolic actions of those who are bad. It is also perpetrated by the vitiating inaction of those who are good.’ ”