Today’s press conference by Republican Sen. David Vitter and his wife Wendy, which I watched on MSNBC, was an attempt by the Louisiana-based legislator to put the D.C. Madam hooker scandal behind him. The press should probably stop camping out on his front lawn, but any guy who allies himself with Bush administration attempts to push “family values” by voting against stem-cell research and making things tough for gays, and is then caught in a moral issue of his own deserves every last thing he gets. 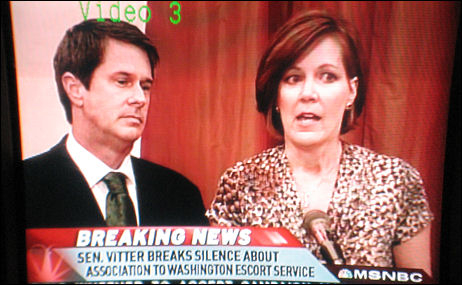 I love it when righties suffer in this manner, but I felt sympathy for Vitter when I realized why he’s prone to playing around. His wife is physically bigger than he is, especially in terms of head sizes, and she’s got a very fearsome stare.
According to Politico, “Vitter was included in a Newhouse News Service story [in 2000] about the strain of congressional careers on families. His wife Wendy was asked by the Newhouse reporter: If her husband were as unfaithful as Livingston or former President Bill Clinton, would she be as forgiving as Hillary Rodham Clinton?
“I’m a lot more like Lorena Bobbitt than Hillary,” Wendy answered. “If he does something like that, I’m walking away with one thing, and it’s not alimony, trust me.” She added,”I think fear is a very good motivating factor in a marriage. Don’t put fear down.”
So that explains it. Wendy’s got anger and violence in her, she’s tough, she’s physically threatening, her head is bigger than David’s and she could probably whup his ass. Obviously he cats around so he can feel like more of a man-with- the-power, so he can hang with eyelash-batting women who are less challenging.