Come 12.18 you’ll have the option of paying between $55 and $70 dollars for the Blade Runner Five-Disc Ultimate Collectors’ Edition DVD set from Warner Home Video, and you’ll get no less than five versions of Ridley Scott‘s 1982 sci-fi noir. There’s something insane about a package like this. You don’t have to be a Blade Runner obsessive living in your parents’ basement to want to own one, but it would help. 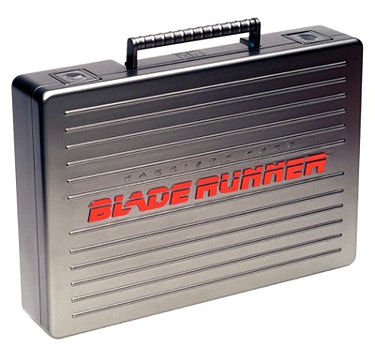 The thing for us level-headed types to do, of course, is buy or rent a stand-alone of Scott’s all-new, restored and remastered “final cut” with added and extended scenes, added lines, new and cleaner special effects and all new 5.1 Dolby Digital Audio track…and forget the rest.
The five-movie set includes (a) Scott’s latest cut (what’s he going to do — improve it again in three or four years?), (b) the 1982 Ladd Co. cut — the truncated theatrical version with that awful Harrison Ford/Deckard narration and has a “happy ending” getaway scene, (c) the “international ” seen on U.S. home video, laser disc and cable releases up to 1992, (d) the 1992 Director’s Cut version sans narration, no “happy ending” finale plus the “unicorn” sequence that suggests Deckard may be a replicant, and (e) something called a “work print” version (altered opening scene, no Deckard narration until the the end, no “unicorn” sequence, no “happy ending,” etc.). Plus a documentary called “Dangerous Days: Making of Blade Runner.”