Neil Jordan‘s The Brave One (Warner Bros., 9.14), otherwise known as Jodie Foster-does-Death-Wish-slash-Ms. 45, is starting to be shown to select long-lead press with the idea of interviewing Foster before she leaves the U.S. later this month to start shooting her next film, Nim’s Island (20th Century Fox), in Queensland, Australia 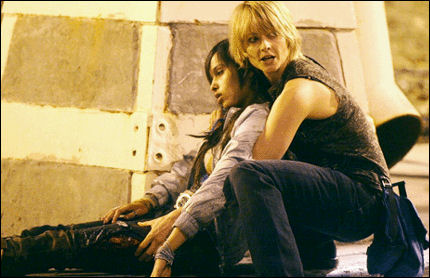 A WB publicist told me this morning that The Brave One will play at the Toronto Film Festival a few days before it opens. An L.A. critic friend who’s seen it had some positive things to say about it last weekend, calling it very compelling, interesting, thumbs-uppy, etc.
The generic online synopsis: “New York radio host Erica Bain (Foster) has a life that she loves and a fiance she adores.” What…a guy? “All of it is taken from her when a brutal attack leaves Erica badly wounded and her fiance dead. Unable to move past the tragedy, Erica begins prowling the city streets at night to track down the men she holds responsible.”
Obviously the basic set-up is close to the one used in the cheesy but historic 1973 Michael Winner/Charles Bronson classic. Abel Ferrara‘s Ms. 45 (1981) is more of a feminist-rage, kill-all-male-predators movie, but the story kicks off because of a brutal assault upon a young girl.
“[Bain]’s dark pursuit of justice catches the public’s attention,” the synopsis continues, “and the city is riveted by her anonymous exploits.” Again — exactly like Death Wish. “But with the NYPD desperate to find the culprit and a dogged police detective (Terrence Howard) hot on her trail, she must decide whether her quest for revenge is truly the right path, or if she is becoming the very thing she is trying to stop.”
The most satisfying solution would be for Howard and his cop colleagues to huddle with Foster after she’s been wounded in a shootout and explain that they know she’s the renegade shooter, and that the best solution would be for her to move to another city. She does that, and it’s deftly implied in the final shot that she’ll soon be back in action.