“We are a Date Destination for Grownups,” Landmark megaplex co-owner Mark Cuban tells L.A. Times columnist Patrick Goldstein in a piece about a pair of cool movie-watching houses in West Los Angeles . “You aren’t going to see kids running around. There won’t be Hostel 33 or Saw 15 playing. We will program for our audience. The mix will still lean toward art and indie fare simply because that is how great movies geared toward adults skew.”

Cuban further predicts that the Landmark will be the beneficiary of this glut of new product. “Some producers will face some financial pain,” he says. “But it will result in better movies making it to our screens. Good movies will find an audience.”
But “all the good movies in the world may still not save the Crest,” a single-screen indie theatre running on upper Westwood Blvd. by owner Robert Buxbaum. “Like the other aging one-screen theaters that populate Westwood, it’s a gas-guzzler in a neighborhood full of Priuses. All those lights on its marquee come with a cost — Bucksbaum complains that his electricity bill probably rivals any theater in the country.” 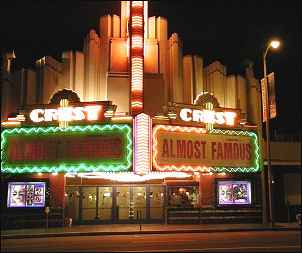 July 10, 2007by Jeffrey Wells15 Comments
« Previous post
Mangold will be first
Next post »
Paramount theatres on the lot