Hartnett and “Mozart and the Whale”

Agreed — Josh Hartnett gives an exceptional, above-average performance in Resurrecting The Champ (Yari Film Group, 8.24). He plays an ambitious sports writer…I don’t want to get into this just yet. (Tomorrow, the next day…it’s a good film and all in good time.) What I asked Hartnett about instead was an earlier performance — the best he’s ever given, if you ask me — in a movie that very few people saw called Mozart and the Whale. 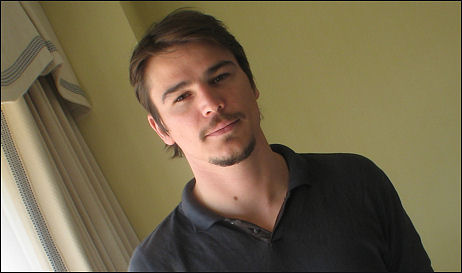 I didn’t actually see it myself. I saw a sweetened-up version that the producers recut, which they called Crazy in Love in some markets. The real version by director Petter Naess has never been released, and I wanted to know if DVD viewers might one day get a chance to see it.
Here’s how Hartnett explained the blow-by-blow. Here’s the back-story of this film as it’s been told to me, but Hartnett tells it better.
I saw the recut, slightly cheerier version of Mozart and the Whale at the 2006 Santa Barbara Film Festival, and here’s my original review. I liked it even though it was “wrong” version, so I’m figuring the “right” version will be even better.
I called it “a Rain Man-type love story with a jumpy heart…jumpy as in child-like, energetic, anxious.”
Hartnett played a character based on a real-life guy named Jerry Newport who’s afflicted with with Asperger’s Syndrome, which is a highly functional form of autism.

“A romanticized, tidied-up version of a complicated real-life love story, Mozart and the Whale is about a youngish couple (Hartnett, Radha Mitchell) with Asperger’s Syndrome,” I wrote. “And this, viewing-wise, is nervy and provocative in more ways than one.
“It’s not calming or swoony like other love stories because the lovers are always in a fairly hyper and unsettled state, which feels a bit challenging, but it seems real and fairly honest and is obviously on a wavelength all its own.
At first you’re thinking it needs a regular-guy character (like Tom Cruise‘s selfish prick in Rainman) to provide stability and perspective, but then you get used to the manic energy of it.”