The conventional view is that Lindsay Lohan‘s latest DUI bust in Santa Monica at 1:35 this morning, or roughly nine hours ago (TMZ reported the arrest at 8:45 ayem), means that she’s really finished this time — finito, toast, done. Not because she can’t dry out and come back a la Robert Downey — she could obviously do that — but because she’s become such a pathetic metaphor for our own much-feared inability to defeat our private demons. 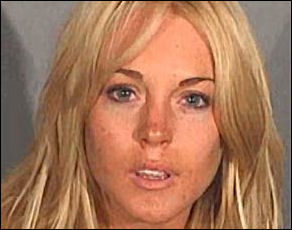 One look at Lohan and you’re reminded that you, too, have the potential to not heed the warning signs and screw things up even more. She can’t be an “actress” any more because there’s no accepting her as anyone other than herself — the dumbest and most arrogant meltdown case in Hollywood history. Her rep isn’t David Letterman fodder any more. It’s gone beyond that. It goes without saying that she’s become the industry’s youngest-ever Norman Maine. If this was a movie, the classy sad solution would be to walk into the Pacific…and stay there.
I love this Mark Lisanti Defamer graph: “If there’s a bright side to this latest incident, it’s that her mugshot is somewhat more flattering than those pictures from her Memorial Day meltdown; at least for this latest photo shoot, Lohan was lucid enough to give the camera her best ‘stunned by my amazing capacity to fuck up my life’ pose.”
Fantasy Moguls‘ Steve Mason is predicting that her arrest will boost business for Lohan’s new film, I Know Who Killed Me, which opens this weekend. “According to industry tracking, the pic had a total awareness levels of just 45%,” he reports. “Lohan’s arrest, and the ensuing media onslaught, will almost certainly drive that number up. It’s very possible that the picture will do better than it would have had she been trouble-free this week.
“Without the DUI, Lohan’s new movie was probably doomed to an opening weekend of $2 to $4 million,” Mason says. “Now that she’s the resumed her well-earned role as Hollywood’s most screwed-up young star, I’ll raise that target to $4 millon to $7 million.”
And once again, here’s to Dina Lohan — the Tallulah Bankhead/Josef Mengele of celebrity moms. 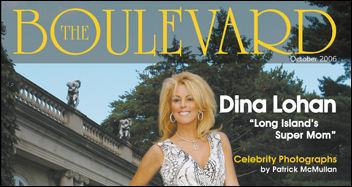