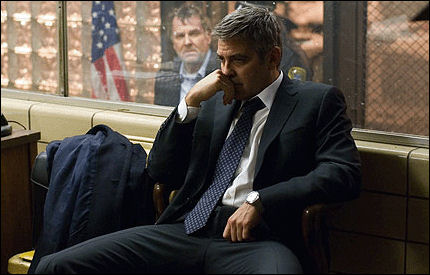 “Aside from being a terrific legal drama, it’s especially noteworthy for the astonishingly assured direction by Gilroy. The pared down, rat-tat-tat efficiency he brought to the Bourne scripts is very much in evidence here. Pic otherwise reeks of the serious-cool craftmanship of other Soderbergh/ Section Eight productions like Out of Sight, Traffic and Syriana. What a debut!
“Onscreen talent is all top grade. The front-and-center Clooney manages for the most part to avoid his usual droll-sardonic schtick, and is complimented by right-on-the-money supporting perfs by Sydney Pollack and especiallyTom Wilkinson and Tilda Swinton.
“The film might be just a little bit too dour to be a massive mainstream success, and perhaps has a slightly inflated sense of it’s own importance. Ultimately it presents a fairly simplistic message about corporate greed, but from frame to frame I’d challenge anyone not to be entertained by it.”