“Once” is still trying

I was talking to a nice-enough twentysomething guy from Thousand Oaks before last Monday night’s Bourne Ultimatum screening. He doesn’t work in the business and it was clear soon enough he wasn’t a film buff, but he seemed an intelligent, well-groomed adult. So I asked him at one point, “Have you seen Once? One of the best films of the summer, the best date movie in years?” Not only had the guy not seen it — he hadn’t heard of it. 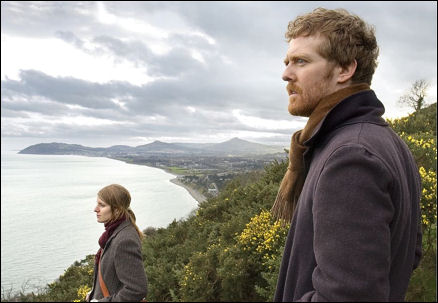 I know what you’re thinking because I thought the same thing for a second or two — the guy’s not into movies at all (probably more into ESPN and hanging with his friends) and therefore his CRM-114 discriminator is blocking the transmissions. And yet he seemed alert and conscientious, and was very keen on seeing Matt Damon whup ass so he obviously pays attention to the movie world to some degree. I decided that if a guy like this hasn’t even heard of a movie as good and spirit-lifting as Once, something’s not right.
Since opening in mid May, Once — a low-budget musical about a platonic love affair between a Dublin street musician (Glenn Hansard) and a Slovakian singer-pianist (Marketa Irglova) who works as a flower girl and a house cleaner, and who’s also a mother of a little girl — has become a rousing indie-level success. Made for $150,000 U.S., give or take, it’s grossed $5,541,181 as of 7.22.07, according to the IMDB. And it’s still in theatres after nine weeks of play because it keeps selling tickets — not in massive numbers but steadily…hanging in there.
And now Fox Searchlight, which acquired Once for $600,000 last February, is hoping that business will increase from a fresh surge of TV ads (I saw one a few days ago) and from the attention that Hansard and Iglova will be attracting from their modest Swell Season tour over the next few days — a 7.28 performance at Chicago’s Old Town theatre, an August 1st performance at L.A’s El Rey, an August 4th show at San Francisco’s Noe Valley Ministry — along with three talk-show appearances on Jay Leno, Craig Ferguson and Carson Daly. (Hansard and Irglova will also be performing and schmoozing at a small L.A. industry event this Tuesday evening.) 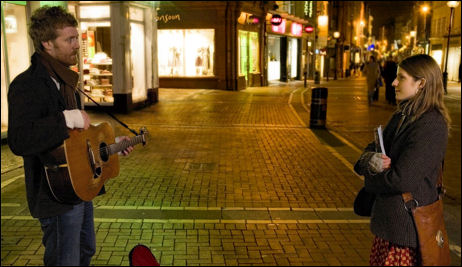 And yet there’s something slightly whacked about that $5,541,181. The bottom line is that the vast majority of U.S moviegoers aren’t interested or haven’t heard or aren’t able to see Once because it isn’t playing nearby. A movie this honest and touching and transcendent should be doing better. It should at least be topping out in the $15 to $20 million range, and not looking at a push to $10 million. Are main- stream auds really that shallow, that uncomprehending? This is a film that gets people where they live when they see it. Once is the musical of the year and yet the callow, repetitive, emotionally coarse Hairspray will make about $15,402,000 this weekend.
Every so often you have to throw water in your face and resign yourself to the reality of life in the U.S. of A. No movie can become even a mid-sized hit in this country without stars or broad-ass selling points or a big marketing budget. Apparently the combination of Irish accents, broken hearts, beat-up guitars and fixing vaccuum cleaners on the side doesn’t play to the American dream, which is always about challenge, winning, beating the odds or at least being cool. On the other hand I’m thinking of a line that Jose Ferrer said to Peter O’Toole in that leadup-to-the-torture-scene in Lawrence of Arabia — “I am surrounded by cattle.”