Since writing a January 2003 slam piece about the exceedingly rote box-office spinmeister Paul Dergarabedian (“The Man Who Would Be Dull”), I’ve wondered every so often if anyone would voice a similar view. I had pretty much given up hope but now, four a half years later, it’s finally happened. New York magazine’s Vulture editor Dan Kois has written a 7.12 piece called “Paul Dergarabeidan Must Be Stopped.” 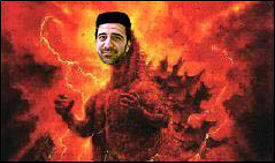 “How many times can you write, ‘Harry Potter was magic at the box office’ before your will to live evaporates?,” he says in one passage. “That’s where Paul Dergarabedian comes in. Dergarabedian, who worked for box-office tracking firm Exhibitor Relations for fourteen years before starting his own company, Media by Numbers, in December, is the media’s go-to guy for insipid quotes about the box office.”

Here’s how I put it way back when…

“Your eyelids are getting heavy. You’re feeling sluggish, listless…under the weather. You don’t have the flu or even a cold, but something’s wrong and you can’t figure out what.

“Then it hits you — it’s Monday morning and you’ve just finished reading a news story about the weekend box-office figures, and one of the industry analysts quoted was Paul Dergarabedian… that’s it! You were thinking about taking a couple of aspirin and drinking plenty of liquids, when all the time it was just an involuntary reaction to a perfectly likable box-office analyst with a beard and a warm smile and a narcotizing way with words.” 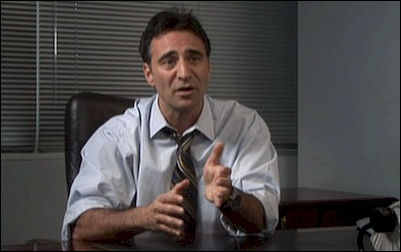 As the photo accompanying the New York piece confirms, Degarabedian has since shaved his beard.

“Dergarabedian is routinely requested by Hollywood industry analysts like the New York Times‘ Rick Lyman, USA Today‘s Scott Bowles, and Dave Germain of the Associated Press to explain the weekend numbers and give some kind of bland, toothless spin about which movie won or lost, and why,” my ’03 piece explained.

“Everybody likes Paul. He’s a nice, dependable guy who always has the numbers at hand and is always ready to discuss them on Sunday afternoons, when box-office stories are usually written. And yet I feel he’s giving the art of Hollywood box-office analysis an unfortunate taint of roteness and tedium. His pronouncements are almost oppressively mundane.

“I can’t think of any statistic or judgment Dergarabedian has ever put forward that was wrong, but to me he always sounds so damnably measured, safe, underwhelming and status-quo affirming, which has a kind of Orwellian effect after a while.

“When box-office snipers suggested last May that the opening-weekend take of George Lucas‘s dreadful Attack of the Clones wasn’t what it might have been (i.e., if word-of-mouth hadn’t been so forbidding), Dergarabedian dutifully rushed to the defense of this contemptible film. ”George Lucas is bulletproof in terms of box office,” he told Lyman. ”Regardless of what the critics say, people love these movies. To be the fifth installment in a series that’s been around for 25 years and still to be making this kind of money is truly amazing.”

“See what I mean?

“When Michael Ciepley wrote in the N.Y. Times that some observers “see the coming of Kill Bill and similar fare as the restoration of a new order” — i.e., some kind of new cycle of cynical fetishized violence — Dergarabedian brought a level-playing-field mentality to the discussion by noting “there will always be a desire by audiences to see more intense, more graphic or, in some ways, more realistic situations captured on film.”

“Can’t argue with that, can we?

“When Men in Black II, last summer’s sequel to the 1997 megahit, earned an estimated $90 million over the five-day Independence Day holiday, Lyman wrote it had broken both the five- day Fourth of July record set by Independence Day in 1996 ($85 million) and the three- day record set by the original Men in Black in 1997 ($51.1 million). And all three movies starred Will Smith.

“Asked by Lyman for a quote about this noteworthy event, Dergarabedian said, ‘Will Smith beat himself twice, which is pretty amazing.’

“Ask anyone who really knows this town, and they’ll tell you there’s a lot of drama, humor and intrigue to be found in the box-office battle each weekend.

“This or that movie tanked and some one’s to blame, or a trailer has blatantly lied about the content of a just-opened film and audiences are feeling burned, or a good movie has opened poorly but might have a chance if the distributor will keep it in theatres and wait for the word-of-mouth to catch up. It’s as exciting as anything that happens on a basketball court or on a football field. Just sussing out the different lies the studios are trying to float with the media in order to obscure what actually went down is a trip in itself.