I posted a somewhat negative review of Harry Potter and the Order of the Pheonix two days ago, but I took it down 45 minutes later after a Warner Bros. publicist reminded me that an embargo demand (printed on the invitation, she said) stated no reviews until opening day — Wednesday, 7.1. Now I don’t wanna pickle, but I was scratching my head and feeling a little confused as I did the obedient thing. 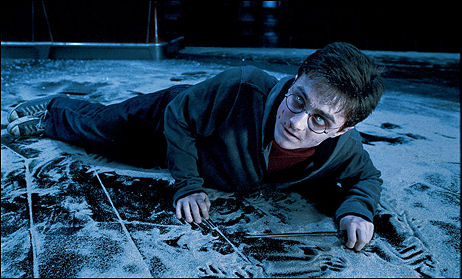 It had seemed to me that the Potter cat was out of the bag last Friday with reviews already posted from Variety‘s Todd McCarthy, the Hollywood Reporter‘s Kirk Honeycutt, Time‘s Richard Corliss, Rolling Stone‘s Peter Travers, New York‘s David Edelstein and Emmanuel Levy.
And I mean particularly on top of last Tuesday’s David Halbfinger piece in the N.Y. Times that talked about the increasing trend of major publications going earlier and earlier on reviews, in part because of a kind of domino effect created by this site and Movie City News and other online sites going early-ish on reviews of certain films.
Halbfinger began his piece, in fact, by saying that Harry Potter and the Order of the Phoenix “does not open in theaters in the United States and Europe until July 11, but the reviews are already rolling in.” He also stated that “the odds that the New York Post and the N.Y. Daily News will hold their…reviews until the movie hits theaters are, roughly speaking, zero.”
Pheonix reviews aren’t a big deal. The big deal is whether or not J.K. Rowling will kill off Harry in the seventh and final novel, which comes out 7.21. Still, I’m wondering how to play this. I’m thinking if the N.Y. Post or the N.Y. Daily News run their reviews on Monday or Tuesday, then I’ll go that day also.